Movies! Talk about them and I go crazy. I simply love watching movies and talking about them. Surely, there are numerous movie buffs around. At times after watching the movie, we feel it was a total waste of time and wish we could have known about it before.

If you’re the one movie maniac who loves all the filmy gossips then you just gotta give it a start and believe me you’ll get amazing stuff.

This article is dedicated to all you suffering from movie mania. Here, I have compiled the list of some great social networks for movie lovers who like to discuss about the latest films, their favorite movies, watch reviews and ratings, get latest news on upcoming movies, latest releases and all about MOVIES.

Roll on and read to know about these sites. Sites that enable you to talk about movies! Discuss them with other like-minded people, watch trailers and videos of new flicks and much more at the sites cited below.

So, have a look on SaveDelete’s compilation of Top 10 Social Networking Websites For Movie Fanatics. Enjoy!

1) IMDB.com : The Internet Movie Database (IMDb) is an online database of information related to movies, television shows, actors, production crew personnel, video games, and most recently, fictional characters featured in visual entertainment media. IMDb launched on October 17, 1990, and in 1998 was acquired by Amazon.com. This may be not one of the attractive sites but surely the most complete film and television reference on the Internet, and one of the most active social gathering places for film fans. 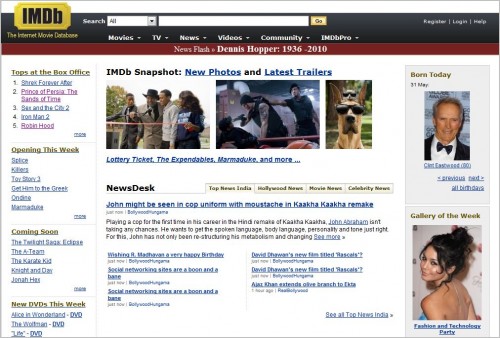 2) Flixster.com : Flixster is a social movie site allowing users to share movie ratings, discover new movies and meet others with similar movie taste. Flixster is a social movie sites for movie lovers which allows users to share movie ratings, discover news films, film info, reviews, movie trailers.Since, its launch, Flixster comes a long way and become one of the most popular sites among movie lovers. It simply is the way to connect movie fans around the world an start discussions about their favorite films. 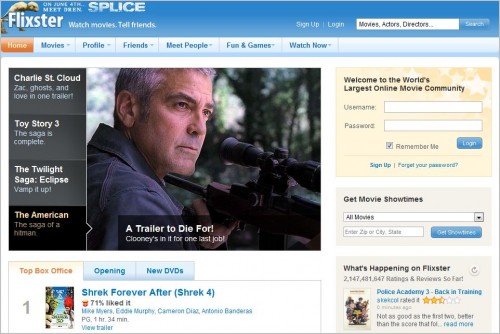 3) Criticker.com : Criticker aims to match you with the people who share your taste in film most exactly. By using the Taste Compatibility Index (TCI), you can identify with whom you most agree, out of thousands. It’s more than just movie recommendations: you’re paired with the people whose tastes are most compatible with your own, and thus get the most accurate advice possible. Did you know that, they started to find like-minds people about their opinion of movie “Shrek”. According to them, “Shrek 2 was nothing more than unfunny puns strung together by slick and soulless animation. And that donkey is the most annoying character in cinema history.” It was that dislike that leads the developers to start the movie rating social network to shared the same opinion. 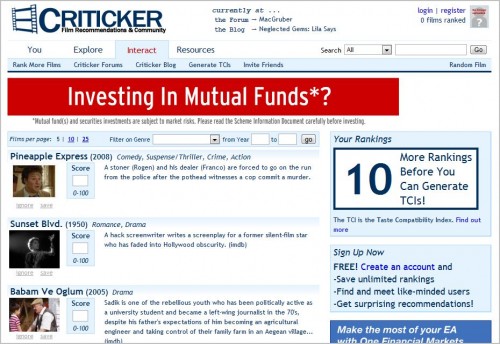 4) FilmCrave.com : Originally planned by Josh and Alex as a personal movie review site, it quickly expanded into the idea of a full use social utility revolving around writing movie reviews, members’ favorite movie lists, and the ability to make and interact with friends. They have a very unique system in which they gives users points for movie ratings, writing reviews, making lists or adding synopsis or plot summaries of movies. 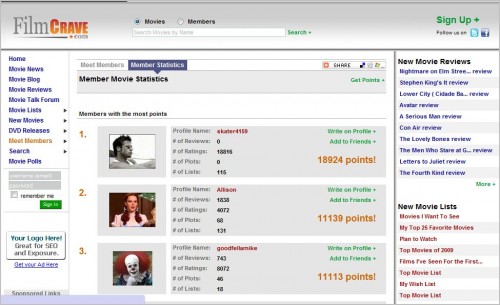 5) Flickchart.com : Flickchart ranking system is unusual, but its very simple and most of all very addictive. You log in and they offered you two films. You have to pick which one you like more. It’s a process which repeats again and again, but you want it more. Yes, I am right, this site almost taken my 3 hours when I logged in first and keep looking for more pairs to vote up and make the best list. I think every movie buffs have to check this site and have fun while voting for their favorite movie. 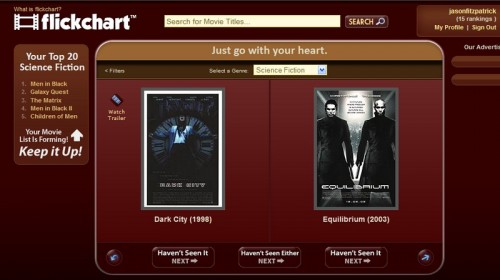 6) I Heart Movies : I Heart Movies is a social movie collection database system which works same as IMDB by combining move ratings and reviews, recommendations etc. The feature which makes it different from other sites are that users can use it as a catalog and keep track of their DVD collections. 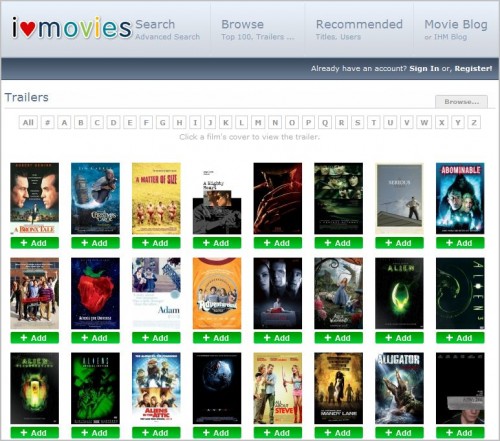 7) Spout : Spout is an online movie community helping you find movies you will love. Spout helps guide you to new movies, and worthwhile movie ratings. It will help you up-to-date on film festivals and Independent films. Spout helps you choose movies to watch with movie reviews from people like you. We offer all the newest trailers along with classic movie trailers. Jump in and start to share your wealth of movie knowledge and find new films you will love. It also provide a unique feature for rating in which you can mark films by “Seen it” or “Want to See It”. It helps to compile a list which movies users wants to see and watching. 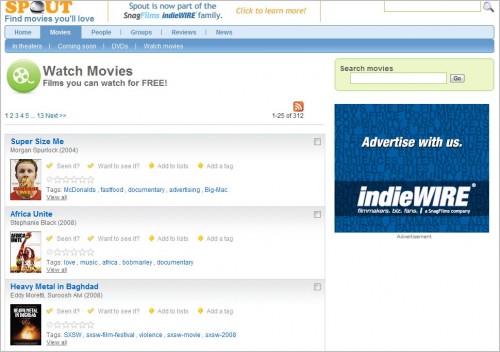 8 ) Metacritic : If you read film reviews regularly, then Metacritic is a kind of movie site that your are looking for. It collects reviews from different critics, gives them rating out of 100 and then gives average score to any films. Most of the times, I found their reviews accurate and you can also discuss if you disagree in the forums. 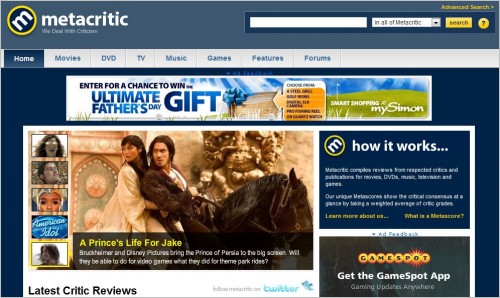 9) Rotten Tomatoes : Rotten Tomatoes is a website devoted to reviews, information, and news of films, most widely known as a film review aggregator. The name derives from the historical cliché of throwing tomatoes and other vegetables at stage performers if a performance was particularly bad. It gives score to the films according to the reviews from various critics. It also got large collection of reviews, plots, summaries, trailers, videos. You can also see various news articles and interviews with your favorite movie stars. 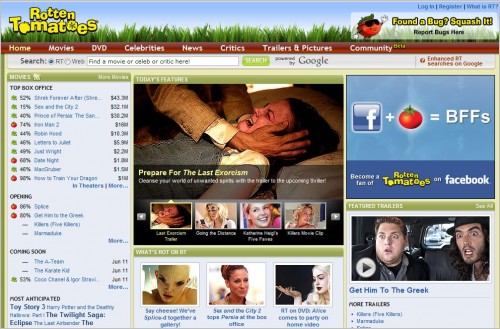 10) The Auteurs : It is not just about discovering wonderful new cinema or classic masterpieces. It’s also about discussing and sharing these discoveries, a place where you can gather and talk about alternative endings, directors’ cuts etc. Heated debates and passionate arguments are welcome. 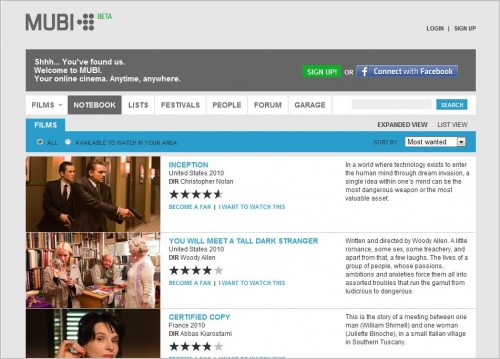 11) Box Office Mojo : Box Office Mojo is an online movie publication and box office reporting service. Its purpose is to illuminate the movies through the integration of art and business. Based in Burbank, California, its staff produces analysis, reviews, interviews and the most comprehensive box office tracking available online. 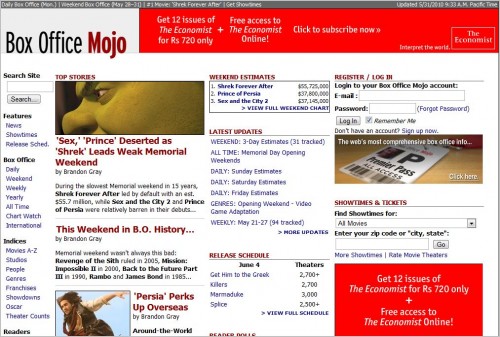