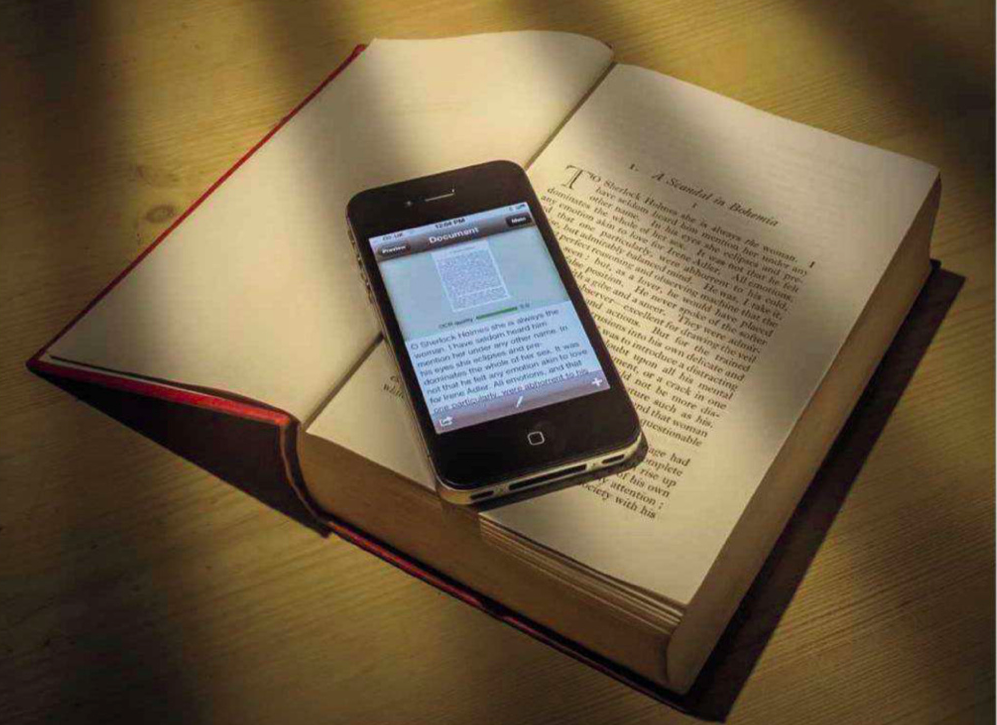 Optical Character Recognition is the wonder technology that was supposed to deliver us the paperless office. The promise of OCR was to convert all our paper documents into digital form. Despite our best efforts, paper continues to arrive on desks, and the chore of feeding each sheet into a scanner, then filing the result, has proved just too much effort for most of us to cope with. Even dedicated scanners like the PaperPort, which sit neatly behind your keyboard and process one page at a time, haven’t been enough to free us from the deluge of printed material.

With the enhanced cameras now ability to scan documents on the go – and to store them neatly and conveniently in a compact, readable and highly searchable manner. The principle is straight forward: you photograph a page of text with your iphone, and the app turns the result into readable text.

Most of the apps featured will work with any iOS device, including the iPod touch and iPad, but do check the requirements in the App Store before you buy. So, here are the 8 best OCR apps for your iOS devices.

Text Grabber can recognise a huge range of languages, from Afrikaans to Welsh, and can translate scanned text from one language to another. It not only word-wraps perfectly, but even interprets hyphenated words at the ends of lines and joins them together again, which is a real bonus.

Doc Scanner is a big on auto detection: it will detect the document edges and document type, and even wait until you’re holding your device steady to take a photo. but its algorithms are off-kilter. while trying to frame the image in the iOS window, a dancing red outline leaps all over the place. It can’t be set manually.

It did word-wrap the document and can recognise text in several languages, but needs a long hold on the OCR button before it will perform its task. Scanned images can be emailed ad PDFs, but plain text must be copied and pasted out.

This curious app has the simplest interface of all: you can take a new photo or choose one from your library, and then you just press the button to convert it. you’re given the opportunity to send the resulting text to Evernote, or by email. at no point are you allowed to view the text directly, which means the only way you can copy it into another is first to email it to yourself.

Imageto Text was the most accurate app of the lot in terms of character recognition errors, but fail to word-wrap.

Mobile OCR couldn’t word-wrap lines, or deal with hyphens at the ends of lines. The resulting text, couldn’t be saved or emailed, only copied and pasted into another app.

QuickReader is heavy on choices, with no less than 13 buttons offered on the opening screen, including those for sharing results with Twitter and Facebook. for an iPhone app, this is pretty cluttered. This is one of the few products that allowed editing of text directly within the app. Files have to be given a name before they can be saved or emailed.

It cannot word wrap line endings and had trouble with drop cap.

Skootch has a friendly interface –  so friendly it won’t let you begin until you’ve told it your email address. It shows the captured image behind a square selection area, but a page of text is likely to extend above and below this, so skootch helpfully advices you to ‘Move and scale’ it. But although we could enlarge the text, we couldn’t reduce it enough to fit in the square, so the bottom few lines of the text can be missed. There’s no word wrap and had trouble with drop cap.

With the highest price tag, Prizmo offered the most features. The image can be rotated, cropped and adjusted for perspective, and separate White Picker and content slider help convert it to pure black and white.

The text can be translated between languages, copied, emailed or sent to Dropbox, Evernote or the cloud. There’s even a function for reading it aloud, using more or less naturalistic voices available for $2 each approx.

Although it can work with a single shot, Perfect OCR prefers to use its ‘SureScan 3x’ technique to optimise the photographed image. this involves you taking not one but three separate shots of the page you want to convert. after capture, a single image is shown – presumably a composite of your three shots – with a strong ruby overlay. you adjust the corners of the overlay to form a frame around the scan, thus squaring it up to enable better recognition. Next, the image is shown squared-up and in stark black and white, with five button for you to identify the blackest text with the least show-through from the page behind. Only after completing these steps will the app proceed to interpret the text. It word wrapped correctly and outperformed all the other apps by a wide margin and proved that if it’s not quite perfect, it’s the next best thing.