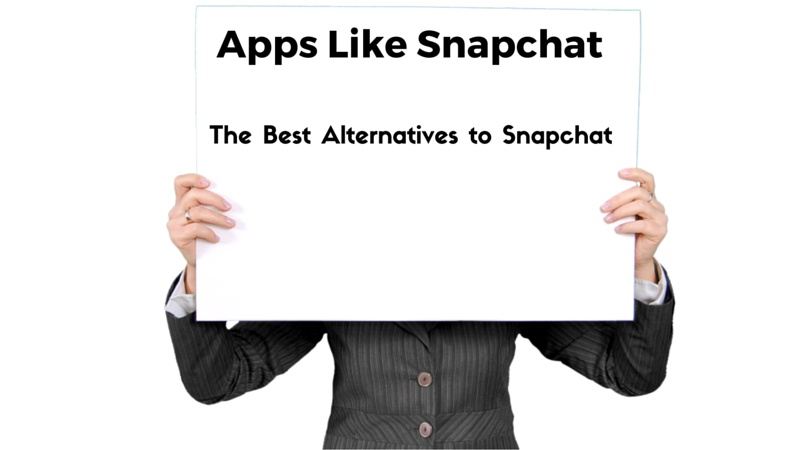 The concept of self-vanishing images became popular, and many apps were made to complete with Snapchat.

Below you will find some of the most popular apps that have the same concept just like Snapchat or you can say alternative apps to Snapchat.

Wickr is an instant messaging app that is made on Android as well as iOS devices. It allow you to send volatile messages which are encrypted end to end in the form of pictures, videos, text files etc.

Because it’s an alternative to Snapchat the messages self- destruct and disappear from the app within few minutes. Wickr was started in 2012 as an Instant Messenger, and many of the people claim that this Instant Messenger is highly secured I consider it reliable as in this age of Cyber crimes it is one of the safest things to have.

Many of the American authors and many of international reviewers consider Wickr as one of the most secure instant messaging apps that has self-destructive messages.

With Wickr, you can also send files, media like photos and videos and you can also add filters, edit images before posting them. All you need is to have the app with your friends, just search for it on Android and iOS App store.

You can also invite your friends over to Wickr, which is an again pretty useful feature. It is compatible with iOS 7 and later and you can use it on iPad, iPod and iPhone it is optimized for iPhone 6, iPhone 6 Plus and iPhone 5 and on  Android devices, it supports Android 4.0 and above.

Clipchat is another 5-second video/photo message application that allows you to send photos and videos which will be deleted after friends view them.

The app has a friendly interface, and it is pretty polished.

Burn note another private messaging app which is similar to Snapchat that enables you to send secure text and all the conversation will automatically be erased.

Although this app doesn’t have support for image and video messaging for text messages, this app can work pretty fine as the name suggests burnout will burn all the notes and leave no traces.

TingerText is another super messaging app that allows you to send text conversations in private manners. This app is majorly used for businesses, and you can use it on smartphones and on desktops. Apart from text messages, you can also send photos and videos, and everything is quite secure and private.

Telegram is another super duper self-destructing app that runs on Windows, Android, and iOS platforms. It enables users to send messages and set the time for the expiration, as your message will be automatically deleted after the time you have selected.

It has good security, and you can synchronize, coordinate, connect, encrypt and destruct your messages.

Yovo is another self-destructing app that deletes your message photo or video after a certain amount of time.

But in Yovo, there is a unique technique that is called the ‘D-fence’ this was invented by Scott Richardson, in which when you try to take a screenshot it will be blurred out.

This app is not available on Android right now but the developer ContentGuard Incorporation will soon be developing for Android OS. It requires iOS 7.0 and above to be installed on iPhone, iPod, iPad, etc. and it is already optimized for iPhone 5, iPhone 6 and iPhone 6 plus.

CyberDust is a mobile application that has Instant Messenger features, and it’s made by Mention Mobile LLC. It is compatible with iPhone, iPod, iPad and it runs on iOS 7.0 and above.

For Android users with 4.0 and above can use this application that has incredible security and strong features. The primary facility of self-vanishing of messages and other features like sending animations, GIFs, stickers, URL that all will disappear within few minutes.

You can also edit images, scribble captions, etc. Cyberdust also sends encrypted images to avoid any kind of unauthorized usage of pictures and if somebody tried to take a screenshot, it will message you and then you get to know who can you trust

That’s it, all of the above messaging apps are pretty secure and are just like Snapchat. Some of these are even better than Snapchat in security. If we haven’t listed your favorite app, then please do tell us from the comment box below.

Beautify your Images with Wonderful Lens Flare Effects by BeFunky