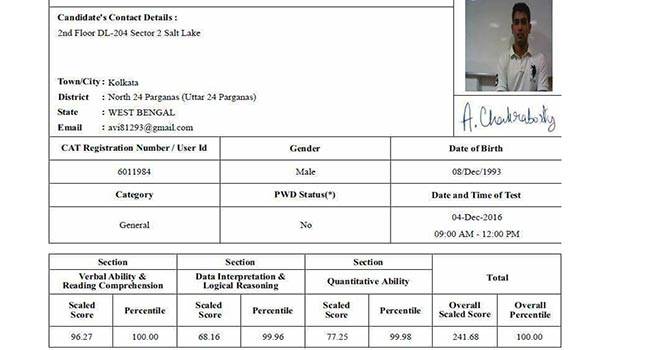 A student at BITS Pilani, Goa – Avidipto Chakraborty topped the results of CAT 2016. He is still pursuing B.Tech (Computer Science) and MSc from BITS and is in this final year.

The results were declared yesterday on January 9, 2017 and this Kolkata boy was overjoyed and he should be.

In his interview he tells how did he achieved his success and what holds in future.

He gave 80+ mock tests and made it a routine to solve at least two or three tests daily. He says “Mock test and analysis is the key to my success. I gave two to three mock tests on a daily basis and in total, i gave 86 mock tests of different institutes like Times, Career launcher and other institutions.”

He also thanked her parents and friends for what he has achieved saying “I got inspiration from people who are scoring more than me, who are repeating the exams. My friends constant advice and guidance helped me a lot,” he said, adding, “My parents gave me full liberty and support.”

His future plans is to join McKinsey as he is already selected there he said, “I got a job offer from McKinsey & Company and I am looking to take the opportunity.”

But he will join IIM-A at a later stage, taking a policy of deferred admission. He said “I don’t want to leave this job opportunity” with McKinsey