The appeal of sports cars has always been as much about aesthetic style and cockpit feel as horsepower and RPMs. This is never been truer than it is for the tech-obsessed 21st century shopper. Not so long ago, being able to use an auxiliary cable to hook an ipod up to a car’s audio system seemed cutting edge, but the newest high tech vehicles are practically high velocity luxury computers on wheels.

Cars of all kinds have capitalized on our desire for connectivity by equipping their vehicles with the latest technological features and tools, and while this trend is sweeping the entire industry, here are three of the most innovative and tech-friendly models of 2018.

For most North American audiences, Genesis isn’t the most recognizable automobile brand. But as Hyundai’s luxury cousin, it delivers many of the same high tech features of an Ioniq on a much more sumptuous level. In addition to typical luxury car flourishes, like wood trim and contrast stitching, the G80 delivers serious performance when it comes to technology.

Not only does it include now-standard tools like a rear-view camera, push-button start, and USB ports, it also has an eight-inch touch screen that allows drivers to access Android Auto, Apple CarPlay, a seventeen speaker sound system, and a wireless charging pad. And unlike many other luxury brands, the G80 offers most of this as part of its standard package, so there are no hidden fees for upgrades.

Few names have garnered as much attention in the automotive world in recent years as Tesla, and as posts on popular online automotive marketplaces like KijijiAutos.com show, Tesla remains one of the most sought-after new car brands. Driven by an innovative vision and the iconoclastic ambitions of its founder, Elon Musk, the story of Tesla’s rise to prominence has at times overshadowed its actual products — which is a shame, because cars like the Model S really are setting out a blueprint for the future of the automobile. 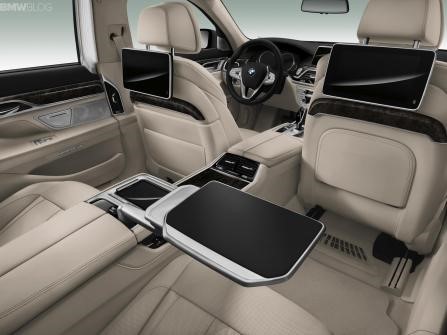 Not only is the Model S one of the few all-electric cars on the road, it also delivers some of the most remarkable automatic driving features. It can change lanes, take exits, navigate freeways and even regulate its own speed, regardless of whether the road is straight, curved, or hilly.

Touring the interior of the BMW 7 Series is a little like stepping inside your own private luxury airplane. Sumptuous and tasteful, the 7 Series delivers incredible comfort and remarkable technology. Its roof windows are equipped with ambient LED lights that create a relaxing, peaceful lighting effect, and all cockpit features from music to temperature are controlled via a removable touch screen tablet. But it is the passenger entertainment options that really make it remarkable: not only is the 7 Series Wifi equipped, the back passengers have their own 10 inch screens set up for Netflix streaming.

Cars and technology have always gone together, and in an interconnected world it only makes sense that consumers would start to demand the kinds of futuristic changes and innovations that have been seen in other areas. And with new breakthroughs making seamless, smart integration easier than ever, it is likely that the golden age of automotive tech is only beginning.

The Importance Of Finding A Reliable Hosting Plan

How To Dress For a Cocktail Party

How to Tint Windows : Follow Simple Steps to Get it Done

Best places to travel with your RV

Tips and Tricks for Finding the Best Auto Detailing Services

How long does it usually take to settle a car accident lawsuit?

Wearable technology: what’s happening and where is it going?