There’s incredible growth in mobile data consumption in the last couple of years, yes, there is no stopping this data growth! According to the Cisco’s Visual Networking Index (VNI), there is a clear indication of a real explosion in mobile data. Take a look at some of the eye-opening trends:

As half of the world’s population is now connected to the internet, the world has reached a significant milestone in data usage. Let’s look at some trends to understand better:

No doubt, video streaming has consumed highest data, as mobile video traffic accounted for 60 per cent of total mobile data traffic in 2016- Ericsson Mobility Report. Yes, video accounting for nearly half of all data consumed, thanks to YouTube which gobbled up almost 50-70% of all data traffic, followed by Netflix with 10-20% of cellular traffic.

The rise in data traffic and consumption is wholly attributed to smartphones. Just look at the percentage contributed, and you will get the point.

At the same time, the data for second screening by device has shown tremendous growth in the mobile segment. Percentage of internet users who use mobile devices while:

The Ericsson Mobility Report states that 90 per cent of the smartphone subscriptions are for 3G and 4G. This number has profoundly contributed to the increased data consumption in different regions globally. 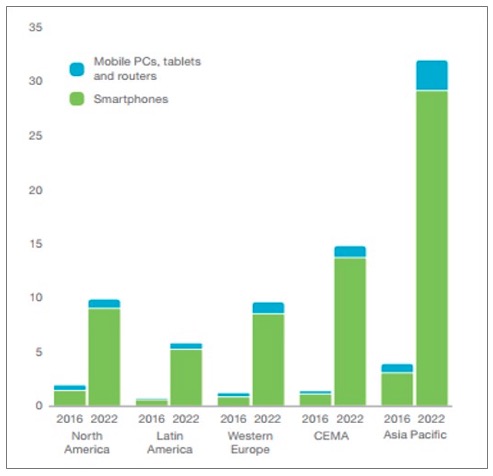 According to Cisco’s Visual Networking Index, global mobile data traffic will increase sevenfold between 2016 and 2021. This will represent a compound annual growth rate (CAGR) of 47 per cent. The data traffic will reach 49 exabytes per month by 2021 (See Figure 2).

Some other interesting facts from the Cisco’s update are:

As far as the regions are concerned,

As the penetration of powerful smartphones and tablets set to increase exponentially, it will result in more mobile data consumption. Although a great deal of the data can be expected to be offloaded to fixed networks by devices (e.g., Wi-Fi), the traffic growth on mobile networks will be still overwhelming.

Looking at this situation, Mobile Network Operators will be severely challenged to provide the much-needed network capacity expansion.

If not done so, the exponential growth in the data traffic and consumption will simply hamper their networks. As a result, there’s a strong need that MNOs will need to revamp their current network traffic management system.

Apple Pay partner Boon to discontinue its service on Oct 3

Samsung set to unveil 5 flagship devices on Wednesday amid pandemic