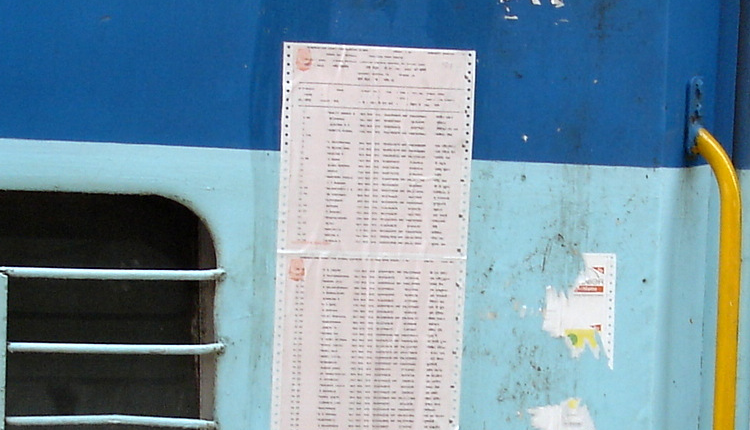 Through this article on “Train Chart preparation time for Indian Railways IRCTC”, I would like to discuss the things that are taken into consideration and things that come into play while preparing a Train Chart by IRCTC. We are well aware of the fact that booking a train ticket can be infuriating, but what is more annoying is the constant wait of being bumped from the waiting list to confirm. If the number of yours in the waiting list is not high, you can be sure about the booking confirmation even before the train chart is prepared. However, if your number on the waiting list is high, you will have to wait till the chart is ready.

Let’s have a look at how a Train Chart is prepared since it plays a significant role in the travel arrangements of an individual who is a frequent traveller of trains. There seems to be a lot of ambiguity when it comes to train booking via the IRCTC (Indian Railways Catering and Tourism Corporation). We have simplified the process and explained aspects of it so that you can book your tickets with a clear idea.

WHY IS TRAIN PREPARATION CHART IMPORTANT?

If you have a waiting list ticket for a particular train and it does not get confirmed even after the chart is prepared, it means that you cannot travel on the train. At least not by any legal means. If your ticket was booked online through the IRCTC portal, it would be cancelled immediately because the card holds no value. However, you will be refunded for the ticket by the means in which you made the payment in the first place.

Train chart preparation time depends on the train and its departure time which is only limited to the reserved trains. A train chart is prepared precisely 4 hours before the train departs from its source station which differs for the trains that leave early in the morning and late in the night. The chart is prepared by the end of the previous day irrespective of the 4-hour rule for a train which starts any time after midnight. The date of Tatkal ticketing procedure will also change depending upon the departure time of the train from its origin station.

A final chart is not a final chart since a further update is made 30 minutes before the boarding time from the source station of the train. These changes include the confirmations of passengers from RAC to a reservation, last-minute cancellations etc. It is always best to wait till this time before making changes in your travel plans in the case; a ticket is made available to you at the last minute.

WHAT IS A CHART OF TRAIN?

A chart of a train is a record of the number of confirmed passengers with a ticket and RAC passengers with their seat numbers and essential details like name, age, gender, seat number and station from where they board and where they get off. The final chart prepared by the IRCTC is pasted on the compartment you get in or on the platform you board the train. If you have booked your ticket from an online web portal, you will get a confirmation text of your ticket or details regarding any up-gradation in your RAC ticket with regards to your compartment and seat numbers.

If you are provided with the status of “Chart is not prepared” on the screen when you check the PNR status, it means that the chart hasn’t been prepared yet. This is anyway, not a point of worry for passengers with confirmed tickets. Once the final chart is made, you can check the PNR status with the help of the PNR number provided to you at the time of ticket booking. Your compartment seat number will be displayed on the screen for confirmed and RAC tickets. If you don’t seem to be allotted a seat and coach number but instead with a waiting list number that means your ticket is not confirmed and you cannot travel with that ticket. Your ticket will be automatically cancelled and does not have a value if you have made the booking online through any of the online travel booking web portals like IRCTC online.

Chart preparation for trains that start from the origin station between midnight in the night to 11 AM is done by 8 PM on the previous night. This has the benefit of letting you know the seat confirmation of your train beforehand. The flip side to this is the lack of information about ticket cancellations being done after 8 PM on the previous day. It is suggested that you must keep checking the PNR status till 30 minutes before the departure time even for the which start between the stated timeline. IRCTC has recently added the feature of “Confirm Probability” to its online ticket booking web portal. The feature, at the time of booking, provides you with a probability percentage of the ticket confirmation, which can help decide whether to book a ticket or not at the time of booking itself rather than being stuck with a waiting list ticket which will ultimately be cancelled. It is always advised that its best check the confirm probability of different trains while booking the ticket and book the train with the highest confirm probability taking the available timings of travel into consideration.

Chart preparation for midnight trains which have their departure time between midnight to morning 11 AM is done before the closing time of the previous day, which is 8 PM.

HOW TO CHECK WHETHER CHART IS PREPARED OR NOT?

Train chart preparation can be known by checking the PNR status on the IRCTC website or by just typing PNR directly in the Google search. If the chart is not prepared, you will get to see the statement saying “Chart is not Prepared yet” on the screen. If the chart is prepared, you can see the details of the compartment and seat numbers of your confirmed or RAC tickets.

You must also check the origin time of the train to know the departure time of the same from the station. If your station is far away from the original one, the chart of that respective train can be made 1-day before your date of journey. Sometimes you may end up getting confused between the charts prepared for certain trains as, if it’s a daily train, the station you are boarding is far away from the train’s origin station. When you are checking the PNR status, it is always essential to check the origin date, time and the station of the respective train.

Train chart preparation can be checked online on the IRCTC website by typing the PNR number in the PNR status checkbox or by directly logging into your IRCTC account if you have one. PNR status of your ticket is also sent to you through a text message by the IRCTC once the chart for the respective train is prepared.

In February 2019, Railway Minister Piyush Goyal introduced a new facility within IRCTC. If you are on board a train with a waiting ticket or RAC ticket, getting it confirmed is more accessible than before. How? You can now check the vacant seats within the coach to by checking the positions of empty seats after the chart preparation. This is an aircraft-like booking facility which will enable a passenger to take a look at the complete coach layout and then decide on the seats they want to book.

This facility is called as the “Public Viewing of Train Charts and Vacant Berths” on the IRCTC website which is a user-friendly interface and will give a graphical representation of the train coaches and berth-wise accommodation status. The system shows a coach layout of 9 classes used in the reserved trains of Indian Railways and more than 120 different coach layouts.

This helps in knowing the available seats within the coaches even after the 30-minute deadline of chart preparation so that you can book tickets in real-time. Complete information of vacant berths from train source as well as any location on the way will be made available to the user. A prospective customer can use the information for online booking of vacant berths or through TTE.

Indian Railways has now introduced the concept of Hand-Held Terminals (HHTs) in its premium trains such as Shatabdi and Rajdhani Express. This means that all Rajdhani & Shatabdi trains tickets can be booked even after second charts are released 30 minutes before the departure of the train. This helps passengers boarding trains from subsequent stations get confirmed seats or berths. It is also a blessing for the waiting list and RAC passengers. The TTE, while checking the tickets on a running train, can update if a reserved seat is vacant because of no passenger occupying it. The status of berths is updated on the tablet device, and the berth then gets allotted to a waitlisted or RAC passenger.

Getting seats in an unreserved coach can be quite a headache for passengers. To bring changes in this, Indian Railways has introduced a new biometric system on an experimental basis under the Western Railway zone. This measure was amended, on a trial basis at first, because of the frequent complaints of seat cornering by antisocial elements in unreserved coaches. Under the biometric system, passengers buying tickets to the general class will have to get their fingerprint scanned. This will generate a token, which in turn has to be shown to the RPF staff during biometric verification at the time of boarding the train. Since most trains arrive at the platform a few minutes before departure, this will help to avoid a stampede like situation as well.

One of the significant moves taken by Indian Railways to improve the experience of travellers is connecting train journeys is the introduction of the concept of linking PNRs. Now, passengers can link two PNRs for a connecting train journey, which applies both for counter tickets and IRCTC e-tickets or a combination of both. As per this rule, if a passenger, travelling on a ticket which is either reserved or not, misses the connecting train due to delay of the first train, then the fare for the portion travelled is retained, and the refund is provided on the balance amount. The refund granted in this case is the fare of the untraveled part.

Are There any True Alternatives of Grooveshark Available in the Market?