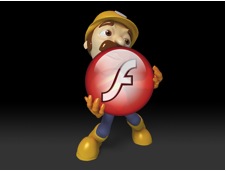 Flash Editor as the name suggests is a editing software which can edit a flash file .swf . Flash files can make a website more attractive if used properly and in a meaningful way.

These flash editors posted below are all open source and can be used to produce the flash files without spending a penny. With the proper use of documentation and guides available with each flash editor, we can create some handsome effects and animations. Without spoiling too much of your time here are the 5 best free flash editors.

Open Dialect is an open source Flash IDE based on Adobe Flex created with the intent to help System Dynamics Modelers to create and publish Interactive Learning Environments to their work. it’s a free flash IDE which allows anyone from beginners to advanced Flash coders to create Rich Internet Applications quickly and easily. These apps can also be published to the desktop using the Adobe AIR runtime. Open Dialect supports 17 different components and action script scripting can be done using either a wizard (for beginners) or by hand (for advanced users).

How To Use Google Search More Effectively

Microsoft Teams to let you transfer calls between desktop, mobile