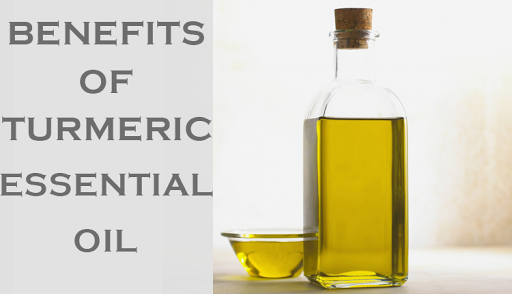 Turmeric, the yellow, woody, and fresh root is staple spice in Asian and Indian cooking. The active compounds, health-promoting vitamins, alkaloids and phenols present in it makes it one of the most powerful healing spice on the earth. Many times we interchange turmeric with curcumin, but the fact is that curcumin is only one of the active ingredient present in turmeric that makes it antiviral, antibacterial, analgesic, anti-inflammatory, antioxidant, antiseptic, anti-cancerous, nephroprotective and radioprotective. Also, it promotes digestion.

In this article we will discuss the benefits of turmeric essential oil which is extracted from the rhizomes or roots through steam distillation and is highly concentrated. Its aroma is woody, earthy like a fresh cut root with the touch of spice.

Turmeric oil is known to contain over 300 phenolic compounds. The major compounds are ar-turmerone, beta-turmerone, alpha-turmerone and curcumin. These compounds are sesquiterpene and promotes the oxygen supply to brain as they can pass the blood-brain barrier. Other phytochemicals in turmeric oil are zingiberene, beta-caryophyllene, eucalyptol, alpha-phellandrene and curcumin. Due to the presence of all these compounds turmeric oil has anti-inflammatory and antiseptic properties. It stimulates gland, soothes inflamed tissues, promotes the health of the liver and brings hormonal balance. Just like turmeric powder, turmeric oil is also anti-parasitic, anti-bacterial, anti-fungal and anti-viral. Also, it is a strong balancer and  natural muscle relaxer.

Inhaling turmeric essential oil is effective in boosting cognitive functions. It improves  concentration and boost memory. It has the potential to treat and prevents age-related neurodegenerative diseases. The bioactive ar-turmerone in turmeric oil is also found to support regeneration in neurological disease and hinder microglia. Microglia is a type of cell that is located thought out the human brain and spinal cord. Activation of these cells proves the presence of brain ailments.

Also, the immune boosting ability of this oil helps in dealing with allergens.

You may also add a few drops of this oil to your diffuser before going to bed so that you can breathe the medicinal vapours whole night.

To enhance mood inhale turmeric oil directly from the bottle. You may also rub a few drops of oil on your palms and breathe profoundly cupping your hands over the face.

Just like other essential oils turmeric essential oil is potent and should not be applied to mucous membranes or eyes. Do not take it internally unless recommended by a  qualified doctor. Also, conduct a small patch test before applying it to the skin.

If you are a nursing mother, pregnant women or taking some medications, consult your doctor before using it. Just like other essential oils keep turmeric oil away from children reach.

Also, turmeric essential oil can make your skin sensitive to ultraviolet rays, so after its application take necessary precautions before stepping out in the sun such as application of highly effective sunscreen, covering face with scarf or wearing a hat.

Anything can be Entertainment