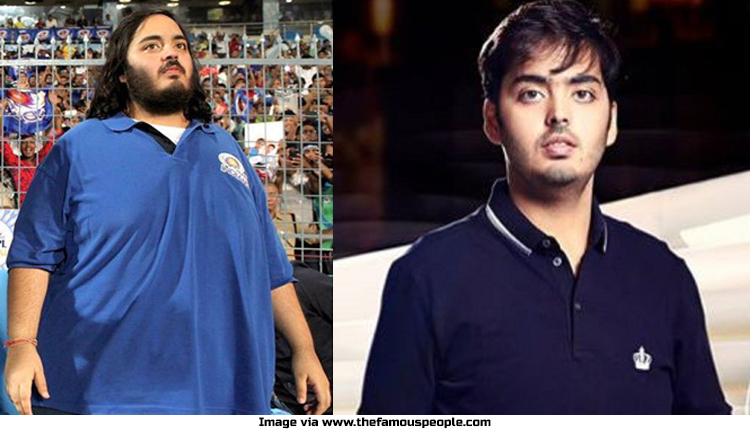 Weight loss journey isn’t easy. We understand this, and this is why we are here to motivate you with inspirational weight loss story of Anant Ambani.

The younger son of Mukesh and Nita Ambani and scion of Ambani empire lost 108 kg in just 18 months.

There were rumours that for this drastic transformation Anant underwent gastric bypass surgery.

But one of the leading publication states that Anant Ambani was determined to lose weight safely and naturally. He had chronic asthma and taking his health condition into account, his family and trainer insisted that such a significant transformation was a risky affair if he undergoes surgery. So he chose the time taking, tough but the natural route of losing weight through healthy diet and exercise.

He followed a strict diet and devoted 4-6 hours daily to the exercise regime.

Anant currently weighs 88 kilos. This drastic transformation can be achieved only through dedication and self-control that money can’t buy. No doubt Anant Ambani is now everyone’s motivation. Let’s sneak peek into his weight loss battle.

If you are rich and obese, your luxurious livelihood is accused of the overweight frame. Each time Anant appeared in public, he was mercilessly ridiculed. For trollers, he became easy prey.

Anant Ambani had chronic asthma, and it was the strong medications that led to ‘medicine induced obesity’. Lack of physical activities and unhealthy eating habits worsened his condition, and he gained an unhealthy amount of weight. Asthma medications slowed down the body metabolism and led to the development of hypothyroidism.

It was not an easy task for Anant’s fitness coach Vinod Channa (an expert in 16 different types of workout techniques) to make a weight loss plan. He had to keep in mind that the plan should not interfere with younger Anmabi’s medical conditions. Based on the useful yet straightforward principle of maintaining resistance pace Anant’s exercise regimen included daily 21-km walk, yoga, high-intensity cardio, functional training and weight training. The transformation journey wasn’t easy. The Workout started with right intensity light training with high reps. He began with continuous walking low-workout sessions. Starting with balance training such as arm reaches and leg reaches he slowly moved to lightweight training with high reps. After losing excess fat he moved to push-up, burpees planks the other functional training to tone muscles.

Asthma medications that Anant was taking increased his cravings, and he was a junk food addict. But throughout his weight loss journey, junk food was off the radar.

Anant adopted a low carb and a zero-sugar diet loaded with protein and fibre and adequate fat. Without any cheat days, he was on a 1200-1400 calorie controlled diet plan. In an interview, Vinod Channa says that Anant was on a very strict diet. He used to have six meals loaded with fruits, fresh vegetables, cottage cheese, sprouts, soups, lentils and pulses. His everyday meal also included a half teaspoon ghee.

Anant Weight Transformation: Fitspiration to millions
Diet control and consistent workout paid. 21 years old Anant took his detractors down, He is now slimmer, leaner and fitter. If the youngest heir of Ambani can do it, you can do it too.

Your dietician and fitness coach can only introduce you with a planned weight loss program. The list of weight loss logistic includes exercise, diet, water, rest and so on. But at the end, it’s your willpower, discipline and grit that pays.

Always keep in mind words of Dhirubhai Ambani “Noting is impossible if one focuses on it.”

10 Reasons Why You Need to Visit Santorini

How to lose weight in four weeks-diet chart

This new model may speed drug discovery for Covid-19

Israel announces state of emergency in all hospitals