Features of e-tron by Audi – electric car like Tesla 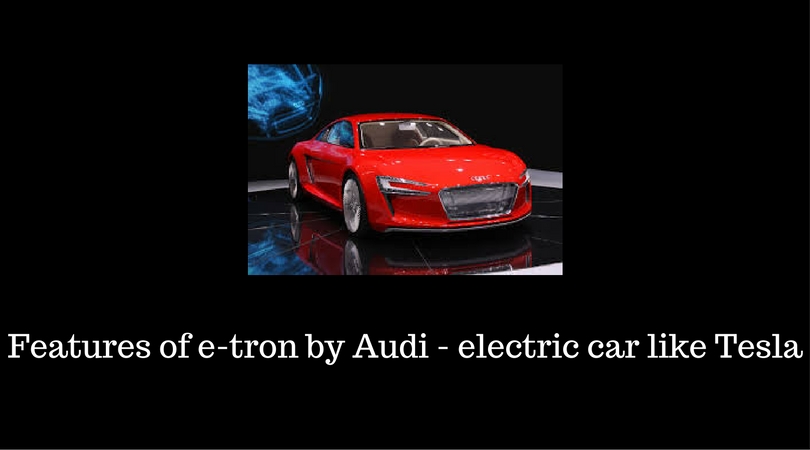 Today’s world is witnessing the rise of electric cars in the automobile sector. With Tesla leading the pack, there is a huge market for electric cars. Tesla’s models such as Model S and Model X have occupied a major share of this market. But soon, Tesla will face quite serious competition in coming months.

With Audi’s revelation of their electric car, the e-tron quattro Concept, an all-electric car, was made last September at the Frankfurt Motor Show. This SUV is supposed to hit the market with production by 2018. It will have three different electric motors which will have a range of about 310 miles with one single charge along with fast charging feature.

Here we have discussed few of the best features of this car which will be present in the production version of the car.

1. Similar to the e-tron concept, the Audi’s SUV will have piloted driving technology

The e-tron quattro concept comes with piloted driving technology which takes the use of radar sensors along with a video camera, laser scanner and ultrasonic sensors. These will collect the corresponding data regarding the environment of the car and will also create a model of the car’s nearby surrounding, all in real-time.

In most of its newer cars, Audi currently utilizes this tech so it is more likely that we may see an advanced piloted system in the car slated to be the production version.

2. Cameras in place of Side View Mirrors

The concept car comes with curved displays which are built into the front part of the doors that will allow the driver view whatever is around. However, there isn’t any guarantee that we may see this feature in the production version but it is a fact that most of the automobile manufacturers have started to experiment with newer and different types of mirror designs.

The concept car features two different touch displays within the cockpit with one on the left side of the driver which will allow controlling the lights and the pilot driving system while one on the right where navigation and media will be controlled. The center console may also have two more OLED displaces for purposes such as climate control and even infotainment.

4. Great range of 310 miles with only one single charge

When compared to Tesla’s Model X SUV, which has all-wheel drive and also comes with 100kWh of battery giving a range of around 289 miles with one single charge, Audi’s car will have more mileage with 310 miles per single charge.

5. Mere 50 minutes to get fully charged

We are quite sure that the production version of the concept car will come with fast charging capabilities, but it is still unrevealed how fast will it actually work. We hope that it will be similar to the concept car.

The concept car comes with a Combined Charging System which means that it can be charged via DC or even AC electric current. With one single full charge with DC current will provide an output of 150 kW in mere 50 minutes.

Audi has also announced that it will be the first automobile manufacturer which will support the latest standard associated with mobile communications, the LTE Advanced.

It means that it can provide more and faster wireless data payloads in comparison with 4G LTE.

With this, we end our take on Audi’s new electric SUV car which is going to be in production soon. If you wish to let us know about your views and suggestions, then leave a comment in the section below.

How many MBs in a GB?

Learn How to Sell Products Online in 5 Easy Steps

UI\UX for startup: What you need to know and focus on

The 8 Biggest Factors To Web Design

How to choose a top web design agency in 2020

Instant Play Online Casino – How to Find Them in Thailand?

Mistakes to Avoid During a 4WD Makeover

How To Choose The Right Broker For Long Term Investment?