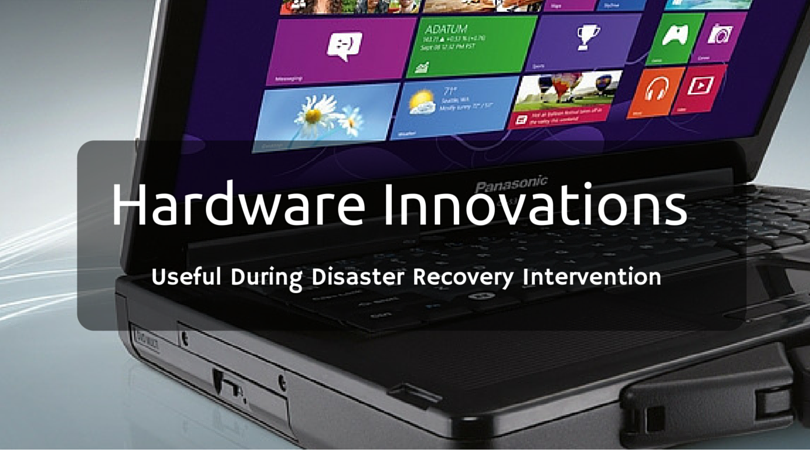 With the world becoming more volatile than ever before and businesses becoming increasingly competitive; it has become necessary for every organization today to be able to handle the unexpected. Moreover nowadays with businesses largely storing their data electronically; most cannot afford to not have access to their IT infrastructure and applications.

So whether it’s a natural disaster or just unfortunate human error which causes a disaster it is very important for individuals and businesses to be armed with hardware innovations that not only prove useful during disaster recovery but also help the business get up and running as fast as possible.

Experts have estimated that most companies that may experience a loss of computerized data either through a disaster or otherwise can easily go out of business within a couple of years. Unfortunately though technology and the role it plays in ensuring business continuity has grown rapidly over the recent years, the hardware to protect the technology especially during a disaster still has a long way to go.

While dealing with disaster recovery and business continuity; it is important to get the business up and running again as quickly as possible. To make this possible it is important not only to get familiar beforehand with the critical components of the infrastructure; but to also have the right hardware to be able to protect as well as put to use; while implementing disaster recovery intervention.

While we try to catch up with ways and means of protecting the technology that we have employed into our systems; here are few hardware innovations which can be useful during disaster recovery intervention.

While most of us believe that the internet is a global community in reality nearly two- thirds of the world’s population does not yet have Internet access. This is why Google has come up with project loon which is essentially a network of balloons travelling on the edge of space.

It is used to connect people between remote and rural areas who do not have access to internet easily and hence filling coverage gaps and also bringing people back online after disasters.

Google has partnered with Telecommunications companies to share cellular spectrum; hence allowing people to connect to the balloon network directly from their phones and other LTE-enabled devices.

Project loons travel approximately 20 km above the Earth’s surface in the stratosphere using software algorithms to determine where its balloons need to go, hence moving each one into a layer of wind blowing in the right direction and eventually the balloons can be arranged to form one large communications network.

This started as a pilot test in 2013, in New Zealand’s South Island and provided Internet to a small group of pilot testers. This group has since expanded to include a greater number of people over a wider area. Eventually, Project Loon plans to continue to expand the pilot, with the goal of establishing a ring of uninterrupted connectivity at latitudes in the Southern Hemisphere.

While various laptops have succumbed to trivial mishaps like falling off a desk and not restarting again there are few ruggedized laptops that can easily survive such a mishap and much more.

While this type of technology was developed exclusively for the military, and also need to pass the MIL-STD-810 military testing standard sets guidelines to be termed as “rugged”, nowadays there are many other industries where rugged laptops like the Panasonic Toughbook can be used including disaster recovery.

With the fully rugged ToughBook able to withstand drops, spills, rain, pressure, dust, extreme temperature shock, and various other harsh conditions; it can easily be used in places prone to disaster without the fear of data getting lost.

Moreover during disaster recovery operations the environment may be very dusty; or still exposed to heavy amount of rain, very strong winds, sandstorms, and large quantities of water such as during a flood, etc which a Toughbook can withstand.

As a disaster management team needs to act quickly; a rugged hardware like the Panasonic Toughbook is able to quickly connect to data and also offers long battery life of more than 12 hours, helping get things into order much more quickly and productively.

Cloud disaster recovery is a “backup and restore” strategy that requires storing and maintaining copies of electronic records in a cloud computing environment as a security measure. These days’ businesses realizing the value of their data are also considering getting a cloud-based disaster recovery plan.

Being important to create strategies against disaster management beforehand which are not only suitable to the company’s needs but also cost effective; the goal of cloud disaster recovery system is to provide businesses with a way to recover data and/or implement failover in the event of a man-made or natural disaster.

Rather than relying on IT backup components; a cloud-based disaster recovery system will virtually replicate a company’s computing infrastructure in the cloud.

Either it can be implemented in-house or would require connections to one or multiple cloud providers who will be in charge of purchasing and maintaining its storage infrastructure, along with additional hardware, network resources or data center space and support personnel.

One can even mix and match different cloud services and create a plan which is flexible, cost effective and quickly executed in a crisis.

How to Move on After Being a Victim of Gaslighting