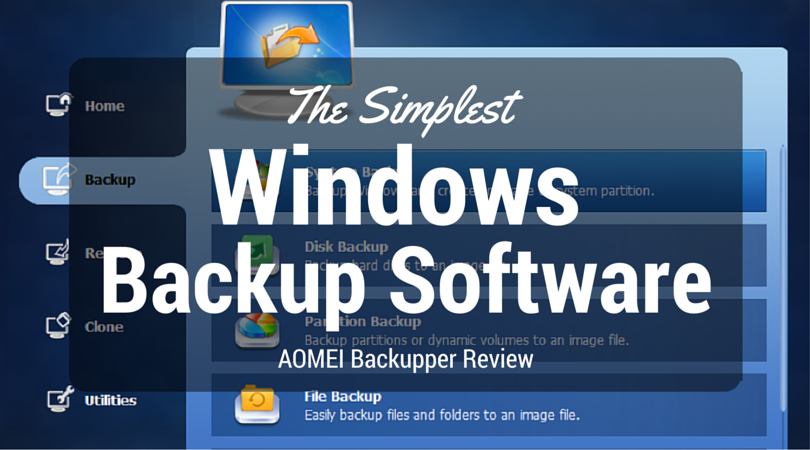 On the surface, AOMEI Backupper is a backup software. But it is not just a backup tool. Besides backup function, its restore function is also powerful! Not only common restore, but also dissimilar hardware restore, selective file restore, restore system from bootable disc, restore from command prompt. AOMEI Backupper supports cloning system, also means migrating OS to SSD.

If you are looking for a freeware alternative to Windows built-in backup program, Standard Edition of AOMEI Backupper is a good choice. Its strong backup, restore, clone, sync features makes it as an excellent backup tool.

Backup and restore are basic functions of a backup software. AOMEI Backupper as a professional third-party, does these two things really, really well.

I have mentioned its restore function above. I would like to emphasize that universal restore is really helpful. Even you change a hardware, for example, a motherboard or CPU, the restore can still be done. When you want to clone, you can also use command lines with AOMEI Backupper. Clone with partition alignment is possible too.

AOMEI Backupper has a special utilities tab. With these utilities, you can manage your backups even better. Here, I list some of them: Explore and check image, create bootable rescue media, PXE boot tool, export/import and Logs. AOMEI Backupper has other highlights: Email notifications, encrypt and compress backup images, intelligent backup & split image, comment and edit backup tasks.

Editions and Prices of AOMEI Backupper

About the price, the cheapest is Professional Edition, which official price is US $49.00 per license, can be used on 2 PCs. But the price is not changeless. AOMEI official often has discounts and activities on their site, we hope you could visit it by yourself.

AOMEI Backupper is a great backup software, which has gained many awards in software market. Although it has many functions, every tasks can be completed in few steps, so we say, it is the simplest backup application.