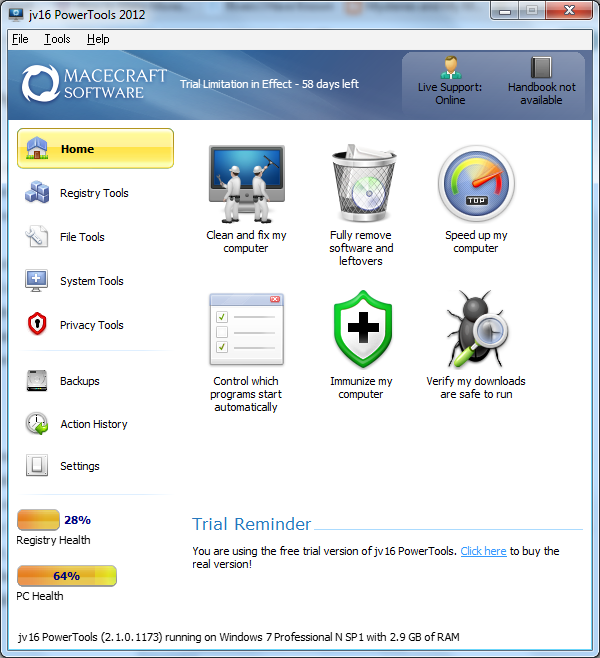 The jv16 Power Tools 2012 from Macecraft is the latest in line in the Power Tools series, and it is available for purchase now, so it’s time to have a sneak peek and see if this year’s version has anything new to offer us.

The jv16 Power Tools follow the philosophy that Windows users should be able to take full control over their PCs, and should be able to clean out their registries and keep their computers in top shape from a single application. With this aim in view, they have released a new and upgraded version of their product every year. I tried out the product on my Windows 7 as well as on my roommate’s Windows XP

This year, the major change that caught my eye, apart from the spanky new icons, was the Immunize Your Computer feature, which is supposed to protect your computer from disreputable sites that contain and can spread malware. It runs okay, but the point is, most of us already have one powerful antivirus or the other installed, and that already carries out this activity, with far less fuss. In matters of protection from malware, I for one would actually trust the experts, instead of paying for the services of a software that is relatively new in this field.

The “Control which program starts automatically” on the home page was actually a neat little feature that I liked. Applications that start automatically with Windows tend to slow down the start up time and take up a lot of memory. This feature pointed out which software started automatically on my computer, and allowed me to disable them. Then I restarted my computer, and yes, the start up time was reduced, and the software in question did not start automatically. So good, finally this software did something it was supposed to. But the thing is, I could have easily done the same declogging from my Windows 7 System Configuration window. It’s slightly trickier on XP, but not at all impossible. So, this feature is effective but redundant.

Next I tried the ‘Fully remove software and leftovers’ button. Again, ridiculously, softwares can be easily seen and removed in Windows itself. Moreover, the list of softwares held no information about each individual software, and I had the hover the cursor over the names to see the paths. So, as far as uninstalling a software goes, I would much prefer going to the control panel of my Windows 7, and selecting programs for removal there. At least I can see what the program is for and when I last used it, so I won’t end up deleting an important software that I might need later and had forgotten about.

The leftover removal tool is of course useful, and it is something I cannot do from Windows. But again, lack of information on the list made me wary about hitting the delete button. When I did, I was happy to think that my system was leftover-free, but a quick scan by CC Cleaner proved otherwise. Personally I prefer to leave leftover files alone, they don’t really cause too much problem, but if they do, the sure fire way to get rid of leftover junk is to approach the developers directly and request their support.

The ‘Verify my downloads are safe to run in’ button will only work if you are connected to the internet. It will ask to download an anti-virus from Macecraft to properly scan your system. While this smells a bit scammy, I still went ahead. The download window just sat there for around fifteen minutes, after which it promptly crashed my system. I am going to confess that I suffered a thorough panic attack at this, because by this time I was pretty jittery about the reliability of this software. Anyhow, I restarted my laptop and was thankful to find that no major harm had been done.

On the Windows XP, the software downloaded without crashing, though it took over half an hour. The virus scanner scanned my computer, and I allowed it to delete my infected files. Either it was supremely good at scanning, because my other (perfectly good) anti-virus did not identify these files, or it just bluffed me with a list of auto generated files that I didn’t even have. Anyhow, I’ll give it the benefit of doubt. I’m going to assume that the virus scanner works okay, provided it does not randomly and unexpectedly freeze your system.

And then of course, we finally come to the salient feature of this software, the unique selling proposition so to speak, the registry cleaning feature. jv16 Power Tools has been the first choice for registry cleaning back in the days when Microsoft did not provide any registry cleaning services. All windows versions up till Windows Millennium Edition (Windows ME) had no registry manager. But we ignore the fact that this is because Microsoft understood and explained to users several times that it was terribly risky to allow a third party to clean your registry. It is simply not possible to clean the registry safely. But even then, there were people who felt they knew better and insisted upon cleaning their registry. jv16 Power Tools in it’s early years was a good tool for that purpose.

But Microsoft gradually moved to better and more modified registries by introducing the NT kernel registry in Windows XP, Windows Vista, and Windows 7. These registries have a different structure altogether. They work quite awesomely on their own, and do not need any interference or cleaning. If you check the Microsoft knowledge base and support centre, you will notice that Microsoft persistently requests you NOT to try and clean your registry. They warn that attempting to modify your registry could result in an irretrievable collapse of your operating system, and you might be forced to install Windows all over again.

The point then is not whether the jv16 Power Tools can actually clean your registry, but whether it is actually needed. I repeat, if you use Windows XP, Windows Vista, or Windows 7, you do NOT need a registry manager, your operating system does that job for you, in a much better and safer way.

All the same, to keep the review comprehensive, I tried the registry cleaner as well. Well, obviously I was not going to let  a software that had already proven to be sticky fiddle around in my registry, but I did do a scan. The scan showed an unbelievably large number of registry errors, unbelievable because I have had Windows 7 installed only last week. Getting suspicious, I tried it on a friend’s system, where Windows 7 was installed just today. It came up with more than 250 registry errors!

Quite possibly a few of the hundreds of registry errors it found are genuinely errors, but mostly I suspect it just throws up codes that are orphaned at the moment of scanning.

Overall, this product is good to use, a bit slow at times, but it is quite useful. So go try it this Ultimate Registry Cleaner and Windows Utility Suite

Sectors That are Playing Offenders of Student Loan Crisis