The TouchPad is a mobile tablet computer from HP, initially announced on February 9, 2011, to be sold in the United States beginning July 1, 2011, and in many countries shortly thereafter.

HP plans to release an AT&T cellular connected version of the HP TouchPad tablet later this summer. The device serves primarily as a platform for audio-visual media including books, periodicals, movies, music, games and web content. Document editing, other than via Google Docs and Box, will not be enabled at launch.

The TouchPad has a 9.7-inch (25 cm) screen, and runs webOS 3.0 on a 1.2 GHz dual-core Snapdragon processor. The device supports proximity-based sharing, allowing compatible devices to wirelessly exchange data, media, and information, via Bluetooth. Here are the 10 best apps for the new HP TouchPad 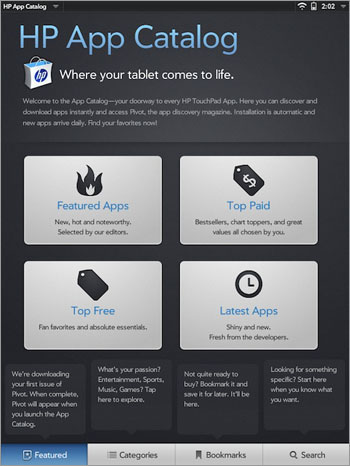 The HP App Catalog, like other mobile app stores, lets you look at the most recent or most popular apps, as well as search by category. 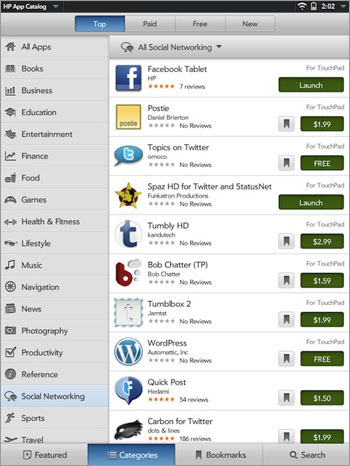 To find TouchPad apps in the App Catalog, look for the little gray words “For TouchPad” next to the name of each app. The last two apps in the list here don’t have ’em; those are Palm Pre apps that can run on the TouchPad, but in a smaller window. You can’t scale them up to full size, like you can do with the iPad’s 2x button.

In 2011, Angry Birds is the sign that your mobile platform has made it. Angry Birds HD for the TouchPad is smooth, free, and plays in full screen. If you become a real addict, though, you’ll have to shell out $1.99 for Angry Birds Rio HD.

The TouchPad is only the second tablet with a dedicated Facebook app. And HP’s app implementation is impressive, with several unique features, including this Flipboard-like full screen view of your news feed. A two-pane interface lets you flip easily between your news feed, messages, events, places, friends and photos, and the places where your friends checked in show up on a map.

The TouchPad’s Qualcomm Adreno 220 GPU has some real oomph, so I went looking for games that showed off its 3D chops. Glyder 2 HD is a beautiful, nonviolent 3D flying game where you swoop around an animated landscape trying to pick up crystals. 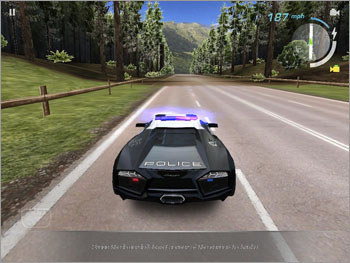 Need for Speed is the premiere series of mobile driving games, and Hot Pursuit adds something a lot of the other versions have missed: an entertaining plot. You can play as a cop or a “racer,” pursuing illegal drivers or trying to evade the police. Action is smooth and good-looking on the TouchPad, and you steer with the accelerometer.

What’s a tablet without a Kindle app? There isn’t much to the TouchPad’s version yet, but it syncs with your existing Kindle library and lets you search for text, mark pages, and check your notes. There’s also a link to the Web-based Kindle store, but when I checked it before launch, it wasn’t working. 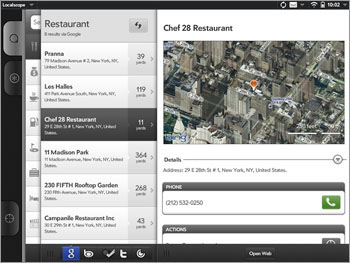 Because the one and only TouchPad so far is Wi-Fi-only and lacks GPS there aren’t many location-based apps available yet. The ones that are out there use Wi-Fi networks to find your location. Localscope gives you nearby results from various search engines for restaurants, banks, cafes and such, but it’s conspicuously missing reviews. Hopefully Yelp or some such company will create a TouchPad app soon.

Spaz was my favorite Twitter client on the Pre 2, and it’s back on the TouchPad with a vastly expanded feature set. You can skim through multiple search columns, log in as multiple Twitter accounts, use different image hosting and URL shortcut services and, of course, Tweet. It’s all the Twitter you’d want on this tablet. 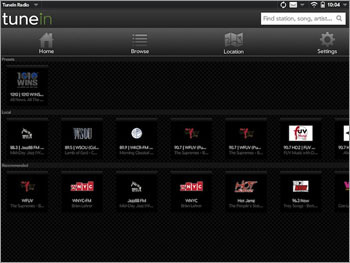 Without Pandora, Slacker or Last.fm around, this is the best streaming music app for the TouchPad so far. TuneIn automatically gathers all of the streams for radio stations in your city, arranging them along a virtual AM/FM spectrum; if you want to go farther afield, you can browse a global directory of streams by topic.

An ingenious, and good-looking text processor for the TouchPad, Typewriter uses e-mail-like formatting conventions (for instance, “_italic_” and “[hotlink]” to create elegant documents. You can save your files to Dropbox, email them, or just save them on the TouchPad to transfer over later via USB. I’d like to see more features, such as spell check and find-and-replace, but this is a good start.

So far the only weather app designed especially for the TouchPad, WeatherBug opens up with a virtual window showing you a recent picture of your location, which is pretty neat. Beyond that, you get forecasts, wind speed and direction, and radar images. Oddly, it throws traffic in there, too. WeatherBug uses the TouchPad’s real estate well, but it’s missing some of the more in-depth scenarios and advice you find on major weather sites, like recommendations on what to wear, allergy reports, or whether the weather is suitable for various activities.