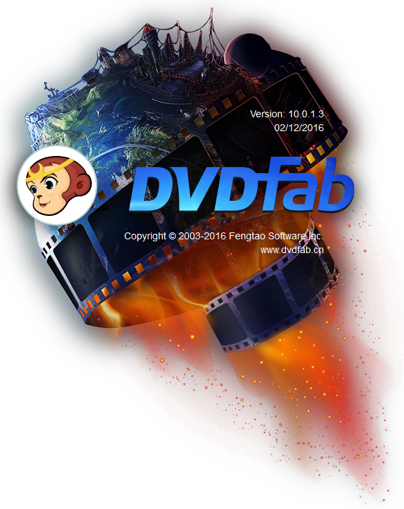 Recently, Fengtao Software Inc. released its new generation of DVDFab software, which is an all-in-one solution package for movie lovers to take care of their DVD/Blu-ray copy, burning, ripping, and authoring and video conversion requests. The company has been dedicated itself in this arena for more than 13 years for now, and has fostered a large user base around the world.

Over the years, the DVDFab software has been evolving and improving constantly. Now with the debut of its 10th generation products, we are glad to see that Fengtao Software remains to be one of few companies which never stop bringing new elements up to the table. As soon as DVDFab 10 gets unveiled, I can’t wait to see what has been changed this time and what remains to be untouched, and here is my hands-on with the all-new Blu-ray ripper software in DVDFab 10.

The very 1st thing that gets totally revamped is the flash screen. They call it that since version 8, and carry it over throughout version 9, but now in the DVDFab 10, we will see a fresh new flash screen. It looks like the company got some new designers there. Anyway, compared with the previous one, this one feels absolutely more dynamic, energetic and ready to power up! I kind of like the new spirit here.

Developers have done some dramatic changes to the user interfaces in the new Blu-ray ripper software in DVDFab 10. On the top of the main interface is the top menu bar, which hasn’t been changed a lot, or not changed at all, except only for the much vaguer dividing line between two neighboring tabs. The way to load the Blu-ray sources has not been changed either, you will still see the large Add button in the center of the main interface, and another Add button near the top left corner under the DVDFab logo. Also hasn’t been changed is the way to set output destination, both in version 9 and version 10, users will have to go to bottom part of the main interface to choose a location from computer hard drive to save the resulting converted videos.

Dramatic changes in GUI design come to the way how the built-in library of conversion pre-configurations, the advanced settings panel and the video effect settings panel are called up. In version 9, to change the conversion profile, users just have to click the profile avatar from the left panel, which is more obvious to find, while in DVDFab 10, with the left panel being gone, there is no longer a profile avatar in the main interface, in replacement, a small profile button is located near the top left corner, next to the Add button. As to which one is better, it’s totally up to specific individuals to decide. The old veterans of DVDFab should not feel any burden to locate the switcher, but to a rookie user, things might be different. To me, I do understand the sacrifice here. As I see it, developers removed the left panel to make more room for something more important, the operation widow. In version 9, the operation window seems a little bit crowded, with the 6 tabs on the top running into each other. While in DVDFab 10, things got way better.

The button that summons the advanced settings panel in DVDFab 9 is located directly under the previous profile avatar, and the video effect setting panel can be called up by clicking the Edit button next to the Add button near the top left corner. However, in DVDFab 10, we see the biggest changes. Those two buttons are located side by side in the operation window, right behind the movie title ready to be processed. To be more accurate, the wrench icon will lead users to the advanced settings panel, where flexible conversion settings such as bit rate, file size, frame resolution, aspect ratio and frame rate of the video, bit rate, channel and volume of the audio can be further customized. The pencil icon next to it opens the previous video effect settings panel where users can crop or trim the videos, add text or picture watermarks into the final video, add external subtitles, and adjust the brightness, saturation and contrast of the video, etc.

A Mini Blu-ray Ripper Is Offered

Accompanying the unveiling of DVDFab 10, there also comes a Mini version of DVDFab, which only features the necessary functionalities in the Copy and Ripper modules of the full-featured version. For years, this is the first time I see true innovations come to a Blu-ray ripper software. According to the official explanation, this mini version is for users to get the ripping tasks done with the least steps in the shortest time possible. As seen in the picture below, there is only one conversion profile MP4 listed. Any complicated settings available in the full version fails to make its way here, all users have to do is to load the original source, and then click the Start button to go converting.

However, being the ultimate simplicity does not necessarily mean users have to trade in everything. If they want more conversion profiles, they can customize and save certain profiles in the full version of DVDFab 10 and next time they open DVDFab Mini, the saved custom profiles shall be automatically imported here.

Ooh, I almost forget, before jumping to the conclusion part, there is one more thing I would like to mention, this mini version of DVDFab will be installed by default when users install DVDFab 10. After installation, there will be two desktop shortcut icons appeared, one is for the full-featured DVDFab 10, the other for DVDFab Mini. The two versions of DVDFab cannot be used at the same time, because no matter which shortcut icon you click on, the startup window seems to be the same one, but what come up after are two different sets of GUIs of the same program.

To summarize my hands-on experience, the new Blu-ray ripper software in DVDFab 10 presents users a totally new user experience. I personally like the new designing language which makes the 13-year old DVDFab look way better than ever, and it comes out with tons of improvements over the last generation.

What’s more, it is the first time in my history with DVDFab that I see a fancy feature – changing skin – becomes a reality. Although it might not matter too much, I am definitely happy to see the developers listen to customer voices and make positive responses. So I recommend all the users to make the upgrade.

If you are not yet a customer so far, it is easy to become one, this world top-ranked Blu-ray ripper software only costs you $60 for a 1-year license, and $105.6 for a lifetime subscription. If you are ready to go, its official website is just one click away www.dvdfab.cn/blu-ray-ripper.htm.