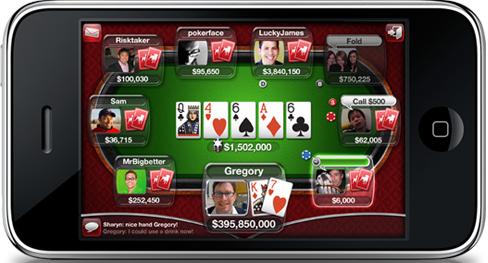 While there are a ton of poker apps available for the iPhone, two stand apart from the crowd: Zynga Poker and Apple’s own Texas Hold’em app. Zynga Poker captures the feel and play you’d find on a typical online Texas Holdem poker site.

Thousands of players can play simultaneously and the interface is much like playing online poker as far as the graphics, layout of the table, and buttons to bet, fold, and raise. With the popularity of Zynga Poker (and Zynga games in general), it’s easy to find a table and jump right into action.

Apple Texas Hold’Em is geared more towards the casual poker fan who wants to improve their game by playing against computer opponents. It does offer support for playing a game with up to eight of your friends but the focus is more on quickly pulling up a game against the animated computer opponents.

You can play in settings such as Las Vegas and tropical islands and you have options for turning on and off animations as well as selecting a variety of table views.

Neither support playing poker for real money (as Apple bans most gambling apps that involve real money), but you can always play on various Mac poker and no download poker sites that let you access the games via a browser.

Seth Clarke is a poker enthusiast writing about poker theory and on a freelance basis. His work can be found on Pokerjunkie.com and many other poker and non-poker related sites.

Best And Free Softwares for Troubleshooting in Windows