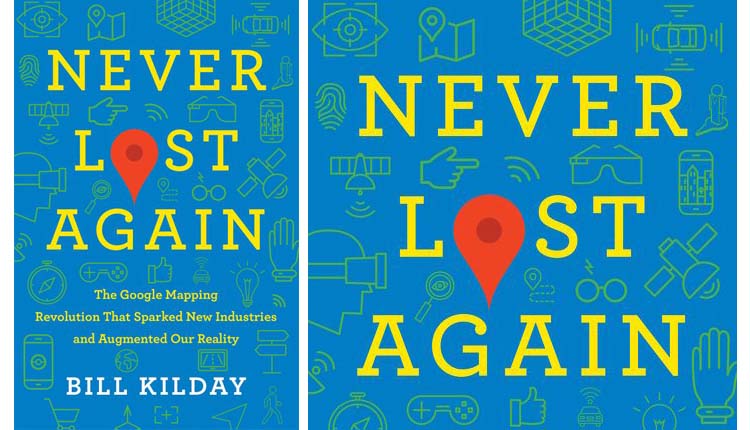 Never Lost Again has enlightened it’s readers similarly as The Facebook Effect, Elon Musk and Chaos Monkeys. It discusses about the interesting facts and the off screen facts of some revolutionary applications ever constructed as a part of Modern day Technology and also the underdog team which designed the present day widely used Navigation Technology.

Kilday embarks this narrative of the revolutionary digital mapping technology by contemplating the anguish on getting lost in the streets of Boston. This isn’t the anger of just Kilday but everyone who faced the problems of being unaware of where they are and having no clue of how to reach the destination before the dawn of today’s most commonly used GPS or Navigation System. He diffuses further into the readers minds with his realistic narration which expresses the anguish of every individual ever got lost with his starting few lines “ In frustration I pounded my fist against my car’s dashboard, yelling at nobody but myself, while driving five miles in the wrong direction down Route 2, looking for the next roundabout. Or maybe it was 3A?”

He differentiates the past and present by further explaining on how this Mapping Technology made our lives easy. It’s so effortless to have the complete map of this world displaying where you are on the map and answering your questions of how to reach the destination and how distant the destination is from your location with just a few clicks. Now a days the usage of Navigation Technology has been a part of one’s routine with GPS or Google Maps having 82% of total Mobile application usage. The Technology of Navigation has increased rapidly from the software being confined to Navigation Devices to Having a GPS application in their smartphones. He also states about the difficult times of being a part of the startup crossing the hurdles like bankruptcy, cash-flow problems and continuous search for

Sustainable business model when he was at Keyhole (Present day Google Maps before it’s evolution).

By the statement “Overnight success twenty years in making” Bill Kilday articulates the progression of mapping technology. He walks us through the transformation of navigation system and acquaints us to the passionate team who gifted us not just Google Maps but also applications like Google Earth and the augmented reality game Pokemon Go( Game which runs mainly on Navigation Technology).

With this book, Kilday takes us back to the inception of Mapping Technology by discussing about the first startup company which is named as “Keyhole” started by John Hanke a resident of a small town Texas. This innovation was almost folded when the Tech bubble burst. The first big clients of this Technological mammoth was a Real Estate Company who wished to use this software in identifying properties. But the young engineers behind this inventory Sergey Brin and Larry Page always believed that this software has a potential beyond this simple property mapping. Navigation Technology was confined and bounded due to it’s contract with the CIA but was first brought into light by the CNN News Channel which used this Technology to cover the Telecast of the war and increased the reputation and existence of modern day Navigation Technology. Keyhole’s CEO, John Hanke signs the CNN deal of providing them with the mapping technology for it’s war coverage after 9/11. He further insisted in having the link of Keyhole’s website on the CNN graphic as a reciprocation of this assistance which increased the onlookers to this sensational software.

The author of the book Bill Kilday adds his personal insights and experience as the Marketing Director of both the revolutionary companies Keyhole and Google Maps about the lesser-known aspects of the Technology linked with Mapping Technology and the master minds related to it. He explained the framework of this mind-blowing technology with his discussion about the collection of Satellite images and Image processing of some innumerous images. Piling the data of millions of terabytes which includes measuring density (Population density, Vehicle density etc) at a particular place processing the images which is predominantly used now a days to know about the traffic updates. Kilday doesn’t just confines the book with his past experiences but also gives a sight of the transpiring Navigation Technology and it’s usage in the modern technology like Virtual Reality and Self driven Cars which are going to be a part of our living soon.

Never Lost Again, as the title of the book implies none and nothing has ever remained lost with the instigation of Navigation Technology. Kilday articulates the beauty of Human Vision and Imagination when it is implemented.

BOOK REVIEW OF “UNBULLIED – 14 Techniques To Silence The Critics…