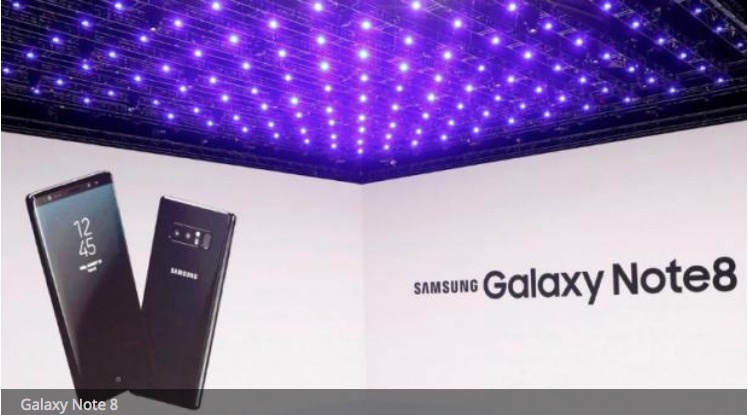 Samsung’s flagship smartphone Galaxy Note 8 won the India Mobile Congress (IMC) 2017 ‘Gadget of the Year’ award on Thursday. The Galaxy Note 8 has an advanced version of ‘Bixby’ Digital Assistant and ‘S Pen’. This smartphone was launched in India on September 12, at Rs 67,900.

Asim Warsi, Senior Vice President, Samsung India Mobile Business said, “With Galaxy Note 8, we have strengthened our leadership in the premium smartphone segment in India and this award reflects our hard work.”

Since it is a high end smartphone, its specifications are also kept high. This tablet has 6.3-inch Quad HD + Super AMOLED (2960×1440 pixels) (521ppi) Infinity Display. The beel is less in the screen so it can also be called as to example display.

The feature of Note Series is the S Pen given in it. This time the company has made several major changes in the stylized S Pen. The tip of this pen is thin, and it will also work in the rain. That is, it is raining heavily and you have to make some notes while drifting so easily through Note 8 on this stylus. Apart from this, many improvements have been done in S Pen.

In addition to simple notes, live messages can also be sent. This is actually a GIF file for your writing and drawing. Both phones and stylus are IP68 waterproof.

Talking about the camera, dual camera setup with dual optical image stabilization has been given in its rear. Samsung has dual-rear camera setup for the first time in any of its smartphones.

Taxes Thieves will now be caught with the help of social media, government has given a contract for Rs 650 crore to private sector firms

Google set to roll out dark mode on Chrome OS

Facebook ready with internal tools to tackle chaos in US polls

Google set to roll out dark mode on Chrome OS

Facebook ready with internal tools to tackle chaos in US polls