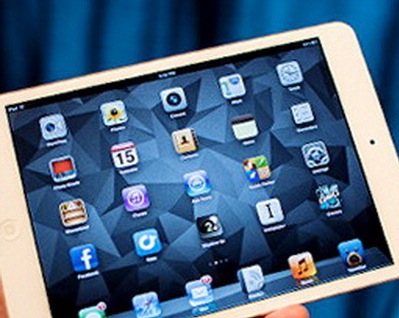 The iPad mini has launched on 23rd October that contains the full strength of an iPad but smaller in size. But the question is that will it be the attractive one being smaller in size for the users who do not want to pay more for it?

The buyers who are spending $200 for the Tablet PC will they buy this smaller device for their use for fun and enjoyment? The answer is very simple and straight. This is the multi-featured mini iPad which is most cost effective and less-expensive. As like as its big brother this iPad mini has also the exclusive ‘Retina Display’ which will attract the users as per the inspiration got from its manufacturer Apple. Now we will discuss why the buyers will be interested to buy this iPad mini with retina display.

This mini power pack presentation is available with the 7.9 inches retina display which is having 3.1 millions of pixels that is a million more than any hi-fi HD TV available in the market. The pixels are with 2048 x 1536 resolutions and which is about four times large than the previous iPad mini. The pixels are closer to each other and that is producing the razor sharp texts with an eye soothing effects to the user.

The iPad mini is having the incredible looks and packed with so many stunning features that will make you amazed. Including the retina display and coupled with the powerful A7 chip and the advanced wireless technology made the product so attractive. Moreover the iPad mini has the shiny looks with its hard Aluminum case and the thin (0.29 inches) design which must catch the eyes of the buyers. The light weighted (0.73 Pounds) iPad mini is easier to carry and use.

The mini pack but with a powerful bomb, that is Apple iPad mini. The A7 enabled chip M7 motion coprocessor is presenting the 64 bit desktop features which are the class architecture by the manufacturer. You can play and enjoy any high quality games and movies as it is having the 4x CPU speed and 8x Graphics performance. The 10 hours of powerful battery support is providing you the privilege of reading, watching, playing and anything you want to do with it.

The beautiful iPad mini is powerful enough but not the enough power hungry than the other iPads available earlier. You can get the battery life up to 10 hours uninterruptedly as it is backed up with the less powerful but more efficient A7 chip. So, with this iPad mini you can go anywhere the power back up will remain alive for 10 hours.

Like the iPhone 5s, the smartphone, the iPad mini has the facility and features of Touch ID fingerprint control which is acting as the Identity scanner for the better security purpose. You can unlock the phone with your own fingerprint and make the purchase from the apps and iTunes from the store.

Though the big brother has the top storage capacity of 128 GB but the iPad mini is also offering you the storage capacity such as 16 GB, 32 GB, 64 GB and finally with 128 GB which has made the product surprisingly best.

The advanced wireless system with the iPad mini ensures you the better network coverage where ever you go with it. The iPad mini offers you the more powerful up to twice Wi-Fi connectivity and the two antennas which is built with the latest MIMO technology. With its dual bands (2.4 GHz and 5 GHz) 802.11n Wi-Fi and MIMO technology you will be getting the lightning fast data download speed up to 300 Mbps. The Wi-Fi and the Cellular network which supports more LTE bands can enables you to get any cellular data network in the globe.

The strong and powerful 5 Megapixel iSight model Camera is providing you the opportunity to get the best quality pictures which are incredibly better. This is the camera which is with the FaceTime HD facility which provides you the opportunity to get the crystal clear face picture while you are making the video calls. All the pictures and selfies are with enlighten with the next-generation backside illumination sensor technology which made the iPad mini as the beautiful one.

You will be having the enhanced and huge apps store with over 475,000 apps waiting for you to reveal. You may have the most attractive apps such as Trip Planner, Blue Print Design for the buildings; repel a zombie invasion and many more that the users will love to become fanatic. The incredible 64-bit architecture you will love to use these apps for the purpose of exploring, studying, drawing and for the zap with the new iPad mini.

To get the Wi-Fi and Cellular versions with your iPad mini you have to spend 100 pound more than the price offered for these models. For the users who have seen the power-pack features of iPad mini once the price is not a big determinant for them to buy it.

Best Open Source Applications For Every Task You Imagine

iPhone 6 Wish List: What Changes People Want in Next iPhone?

Spurt in corona cases as Taj Mahal reopens after 188 days

Over 60K sign up for Russian Covid vax, 700 injected