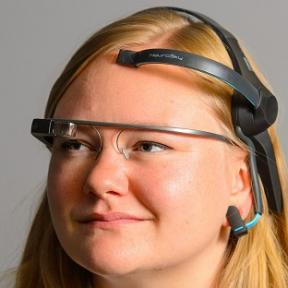 Posting a snap or a photograph to twitter without using a finger or saying a word, just through the power of thought feels like a futuristic idea, but a new app, MindRDR, works with Google Glass, and it means that its now a reality.

A second headset is needed along with Google Glass that regularly communicates through Bluetooth. This all idea starts up after using Glass, and finding that it can be more hands-free.

The headset called the Neurosky EEG biosensor, placed at your forehead, and it measures your brainwaves through sensors. It has simple steps, first – the sensor reads high-brainwave concentration that triggers the app to take a photo or snap and then just post it to Twitter.

Also see – How to make a twitter marketing strategy with tools

The Google Glass device is on sale in the UK staring from this month, after solely available in the United States. The price tag is £1,000. There is a small display at the corner of the user’s field of view the news headlines from specially designed apps.

MindRDR is not an official Google app, confirming that the app has still not been approved and will not be available at the Glass app store for download.

The company said, ” a separate piece of kit will be required to attach to Google Glass.”

As the wearable technology is gaining interest of consumers, so keeping in mind the Amazon launched an exclusive wearable tech store in the UK.

7 Must Read Books for IT Leaders

10 Cool Travel Gadgets you Don’t Need at All