Galaxy S4 vs HTC One | Android That Would Be The King 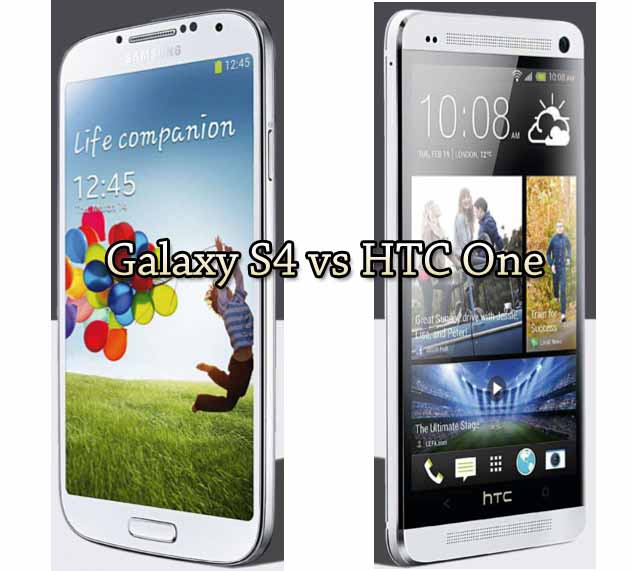 The smartphone battle of the year will be fought on Android. Google’s mobile OS already rules the world, now HTC and Samsung want to knock the iPhone off its hardware perch. Let’s see the face-off with Galaxy S4 vs HTC One, which one of these two giants will be on top, in upcoming months.

We have provided all the aspects from – interface, design, camera, power / battery and the specs to see which suits your need and which can have the upper hand in the market. Let’s us know which one did you like the most and why?

INTERFACE : Striving for ever greater simplicity. HTC has overlaid Android Jelly Bean with the fifth incarnation of its Sense interface. The result? A much clearer, less cluttered home screen. The weather and clock app no longer grace the display – though you can get them back if you wish – and there’s space for more apps on each screen.

This clean up has mostly been to make room for BIinkFeed, the new Flipboard-style newsfeed designed specifically for the HTC One. Things are still a llltle basic at the moment- there‘s no personalised information or RSS – but HTC is opening it up to third-party devs.

DESIGN : That 4.7-inch screen is imposing. but the HTC 0ne’s all aluminium frame is lighter than it looks. at 143g. HTC has built the phone’s dual antennas into the casing to avoid your clumsy hands from blocking reception, while the back of the phone is tapered, giving you valuable extra grippage.

The front is blank save forthe speakers above and below the screen. And what a screen.. a full 1080p display with 468 pixels per inch. with glass that reaches all the way to the edges. Phwoar! Careful with the metal chassis, though, it looks like a scratch magnet.

CAMERA : More megapixels equals better picture. right? No, you couldn‘t be more wrong, my friend. HTC knows this and is trying to buck the megapixel one-upmanship, instead choosing to equip the 0ne’s camera with a four-meg CMOS sensor boasting fewer but bigger pixels. Image quality is improved but the file size is reduced. The result is crisp. clear photos and speedy upload times.

The innovation doesn’t stop there. as there‘s also Zoe Share. a new camera function that kicks in before you’ve de-pressed the shutter and continues shooting three seconds after. it sna ps 20 pics and a three-second video clip to make sure youget the money shot. it can compile a 30~second megamix of images and vids, too. Clever girl.

POWER : The HTC One’s beating heart hasn’t had a massive spec bump, but the 1.7GHz quadcore processor and 2GB RAM will be more than quick enough for most needs.

INTERFACE : As Android’s new poster child. the Galaxy S4 comes pre-loaded with Jelly Bean 4.2.2. the latest version of Google’s OS – hopefully lt will be at the front of the queue for an upgrade when Key Lime Pie hits. too. On top of Jelly Bean. Samsung slathers its own TouchWiz skin. Its new features were arguably the highlight of the S4’s launch. The most futuristic of these is Smart Pause, which uses eye-tracking tech to pause videos automatically when you look away from the screen, and Smart Scroll. which allows you to tilt the S4 to scan down documents or web pages – like playing Super Monkey Balt but less fun. Also included is Samsung’s own translation app. the cleverly named S Translator. If you’re typing out an email or message to Johnny Foreigner the S4 acts as your own pocket-sized diplomatic attaché.

DESIGN : No shocks here. The S4 looks a lot like its Galaxy S3 forebear, all smooth plastic and rounded edges. Unlike the HTC One, it retains a physical home button on the front of the handset – you can just about see it. squatting below the S4’s massive live-inch Super AMOLED screen. That screen really is a beauty  boasting a pristine 1080p resolution and a pixel density of 441ppi. Despite the larger screen, the S4 is Slimmer than the Galaxy S3, at Z9mm, and weighs just 3g more – that’s Apple-like design trickery. The S4 is available in two colours “Black Mist” or “White Frost”, with a metallic band around the edge adding a robust feel.

CAMERA : There’s no lowering of the megapixel count here. Samsung has gone straight for a full 13-megapixel snapper, with autofocus and full HD video recording. There’s a two-meg camera on the front for video chat and. as ever, Samsung hasn’t skimped on the photography bells and whistles. Dual Shot is a new. questionably useful feature that allows you to use both cameras. front and back, simultaneously  to create a picture-within-a-picture – sort of an advanced form of the selfie shot. Meanwhile. Drama Shot captures a quick burst of images. then stitches them together. Time it correctly and you can achieve stunning action sequences. Our favourite new photo feature. however, is Eraser Shot. which gives you the power to delete blurred moving objects and roving photobombers from your meticulously crafted compositions.

POWER : Samsun’s loaded the S4 with a 1.6Ghz Exynos eight-core processor and 2GB RAM. That, on paper, has the HTC One whipped.

Sony PS4 – The Most Powerful Console Ever

Silences of the abandoned

US unilaterally claims restoration of UN sanctions against Iran

Silences of the abandoned

How to Watch TV on Your Computer at your Leisure