Everything you need to know about Google Wallet – android phone app 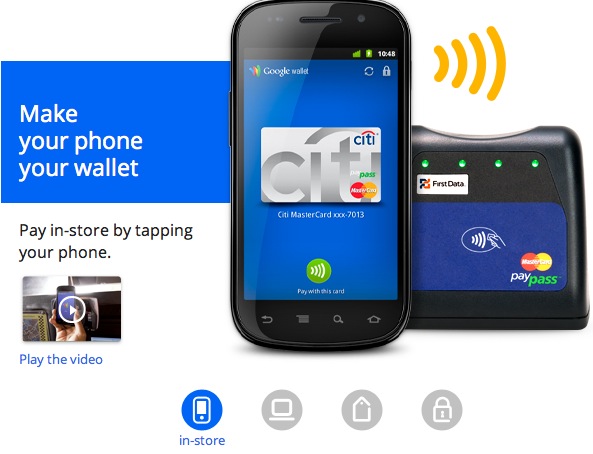 Google’s new Android app lets you pay for items using your phone. Lets get deep into the hidden secrets and the pro – cons of Google Wallet.

For shoppers its a new life, in just few clicks you’re ensured safety of a transaction, and now it also has an Android app, which makes it that more useful.

Google wallet , which launched in the US in September, is a new android phone app that lets you quickly and easily pays for items in shops using your phone. It’s a ‘virtual wallet’, which means that stores your credit cards, loyalty cards and gift cards.

How does it work?

It uses near field communication (NFC), a wireless technology that allows two device two ‘talk’ to each other by touching, or being placed close to each other. It’s similar to how the London Underground’s Oyster Card system works. So you just need to tap your phone against a payment reader to pay, and also to earn your normal shopping benefits, such as loyalty points. It can be used in over 1, 40,000 shops in the US.

Ah, so is it one of those services that’s only available in the US?

Afraid so. However, unlike Google Music or Amazon Cloud Player , Google Wallet is definitely coming to the UK. Recent reports suggest that Google will launch it in time for next year’s Olympic Games in London. If this is the case, trials are likely to take place soon. To receive email updates about Google Wallet, register at www.google.com/wallet/get.html.

What’s so good about it?

Its main appeal is that all your payment options will be on your phone, so you’ll no longer need to carry a chunky wallet around with you, stuffed full of credit cards, loyalty cards and cash. Take a look at Google’s ‘Introducing Google Wallet’ video on You Tube to see how liberating it will be to ditch your bulky wallet!

Yes, very. You need to set up a Google Wallet PIN, and enter it before making a purchase. There is no different from entering a code with a chip and PIN credit card. You can also set the length of time allowed for you to enter your PIN- one minute, five minutes, and 15 minutes or 30 minutes – after which the option is timed out.

How can you be so sure it’s safe?

Because Google Wallet uses a chip called Secure Element. This is separate from the phone’ main operating system and hardware, which means only Google Wallet can access it. All your details are encrypted as they pass from your phone to the payment reader. Also, Google Wallet is very easy to lock. You simply touch the lock icon located at the top-right of the app.

Does this mean it can’t be hacked?

It makes it unlikely, although the obvious incentives will undoubtedly drive criminal gangs to try. Google says that Secure Element has been designed to stop malicious Android apps accessing Wallet.

What is my phone is stolen?

The thief won’t be able to access your details, so you don’t need to panic, but you should still tell your bank to cancel your cards.

Does it cost anything?

Does it work with all credit cards?

At the moment, in the US, users need a Citi MasterCard account or a Google Prepaid Card. The latter is a virtual card that you can top up for free using your existing credit or debit cards. US customers who signed up to Google Wallet before the end of 2011 were given $10 on their Google Prepaid Card, so hopefully the company will be just generous when the service reaches the UK.

Does Google know what i buy?

This is interesting. Google says that Wallet does not “currently” receive information of the products you buy. This gives Google the option to change the rules at a ruler date. Google Wallet does record the time of a purchase, and how it was bought.

You can reset your details to erase all transaction history.

So what’s in it for Google?

Very good question. According to reports, Google plans to make money by sending ‘sponsored’ deals from Google offers (www.Google.com/offers) to your phone. That’s why it would be so useful for Google to know what you’ve bought and from where, so they can tailor specific adverts to you.

Google Offers isn’t available in the UK yet, but in the US it offers special online discounts for a specific period of time.

What phones can it be used on?

It’s still early days for google Wallet, so it can only be used on the company’s own Galaxy Nexus S (www.google.com/nexus). But more Android phones are likely to be compatible with the app next year.

What happen if i switch phones?

You’ll be able to switch your Google Wallet account to your new phone, although if you’re using a credit card you’ll need to decommission your existing phone first. As a security measure, Google won’t let you put the same credit card on two different phones at the same time. Balances on your Google prepaid Card can also be transferred.

Will TI be a success?

Difficulty to say. One of the biggest obstacles will be the public’s reluctance to use and trust NFC. A recent survey conducted by consumer research team Intersperience (www.intersperience.com) found that just 17 per cent of Britons would be happy to use their mobile phone as a Wallet. The study found that consumers generally feel less confident about security on mobile device, so Google will have to work hard to convince people that it’s safe to use.

People are also concerned about having their phone stolen and hacked, and being unable to pay for anything if the battery on their device runs down. Many shoppers will simply be reluctant to swap a real wallet, chunky though it may be, for a virtual one. Google also needs to persuade enough shops to offer the service in order for it to be widely used by shoppers. But perhaps the biggest hurdle will be mobile network refusing to allow it (see box below).

Despite this research, payment companies such as PayPal are optimistic that we will soon be living in a ‘cashless’ world. In November, managing director of PayPal UK, Carl Scheible, said: “by 2016, you’ll be able to leave your wallet at home and use your mobile as a 21st– century digital wallet.”

Wasn’t there a similar service launched ?

Yes, Orange and Barclaycard launched Quick tap in May, which lets customers pay for purchases up to £15. Shops that signed up to the system include    McDonalds’s, Subway, EAT, Pret A Manager and Boots. It can be used on Samsung’s Tacco and wave 578 phones. At the time of launch, Orange vice President Pippa Dunn said: “it is going to start a revolution in the way we pay for things on the high street.” But if Britons really are as reluctant to use NFC as the above survey suggests, this could be a slow revolution.