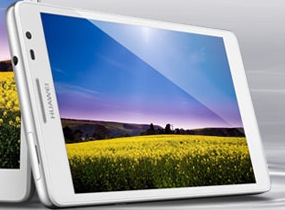 Everyone laughed at Samsung’s masslve S.5ln Galaxy Note, then about 10 mllllon people bought one. In its wake, a new species – the phablet – has arisen, and the biggest yet ls this 6.1in Huawei. Let’s give It a big hand…

1. Big enough to replace your 7in tablet for games and movies

The idea of a mega-screened phone makes sense. lt’s easily big enough to replace your 7in tablet for games and movies, but small enough that you can hold it up to your face without looking like an idiot (although that partly depends on your face). Being only 6.5mm thick at its narrowest helps.

2. the Mate has Jell Bean

Many an Android phone has been launched with the dreaded words ‘upgradeable soon’ tacked on, meaning you won’t see the latest OS on it for ages. lt’s a relief  then. to see that the Mate has Jell Bean from the start. lt’s 4.1 rather than 4.2, but the differences aren’t big.

For devotees of the Note. Samsung’s S-Pen stylus puts the ‘phab’ in phablet. Huawei has not furnished the Mate with any sort of stylus, perhaps to avold accusations of one product looking a bit too much like another. This should only bother you if you like making notes.

Size matters when it comes to battery life. and Huawei has crammed a whopping 4050mAh cell into the Mate. That gives it around twice the power storage of the average smartphone, although how long lt takes to use up that power ls another matter.

On a phone that’s designed to drop a boredom-bashing movie into your Rail Replacement Bus Service nightmare, storage ls important, and Huawei has sensibly included a microSDHC slot. lf garning‘s more your thing, the Mate’s quad-core 1.5GHz – rocessor and 2GB RAM should provide plenty of power.

With 1080p phones beginning to emerge as a new standard. the Mate’s 1280×720 screen isn’t exactly leading the charge into Resolutionland. Then again, it does have a higher resolution (on a smaller screen) than the Nexus 7 or the iPad Mini. so neither is lt short of a pixel or two.

Samsung Galaxy Note II – lt has a slightly smaller screen and a sllghtly smaller battery than the Huawei but this blg brother to the Galaxy S III ls one tasty phablet We’ll fight them in due course but our money’s on the Note.