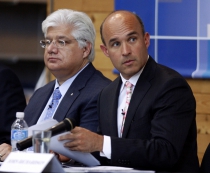 Ten years ago, Research in Motion (RIM) was a leading producer of mobile phones. All who ever meant anything in this world – celebrities, investors on Wall Street and Silicon Valley entrepreneurs – were using iconic BlackBerry.

A year ago, BlackBerry was ahead of all other smartphones with the number of users.

This year the company lost significant market share, and its shares over the past five months fell by more than 50% . What happened?

RIM was founded 20 years ago in the small town of Waterloo in Canada by Mike Lazaridis, have received technical training at a local university. Lazaridis soon attracted another Canadian – Jim Balsillie, who began to help him manage the affairs of the company. They are both credited with turning the company into the largest RIM Canada, and they continue to divide the responsibilities of CEO.

Today, however, the company runs the risk of date, like Nokia and Palm. How things went wrong so quickly?

RIM made a few mistakes:

1. They ignored the iPhone, until it was too late. iPhone appeared in January 2007. Mike Lazaridis, reportedly told his staff that the iPhone will not a threat because no one wants to on the mobile phone as a personal computer. People simply check the mail – this confidence was due to the fact that he created BlackBerry just for e-mail application.

2. Distracted from the main activity in hockey, Jim Balsillie – a passionate fan of hockey player and, like many Canadians. Since 2006, he made four attempts to buy a different hockey clubs for $ 200 million he gave up the idea only in late 2009. You can see how it was during this time RIM loses its competitive advantage and gives Apple. Since the first attempts to Balsillie to buy hockey team until today’s stock price fell RIM to 16%. The average Nasdaq during this period increased by 24%, and the capitalization of Apple rose by 358%.

3. Waited too long before you refresh the stale lineup of smartphones. When Balsillie awoke from slumber hockey, and Lazaridis finally realized that users still want the iPhone, in April 2010 they were in despair, bought a company called QNX , which developed the operating system for next-generation phones RIM. Unfortunately for RIM, the first phones with the new operating system will be available only at the end of 2012, as people increasingly refuse to use the current version of the BlackBerry.

4. Promotion closed ideology of corporate culture and an unwillingness to listen to the ideas of subordinates. Over the past few weeks, publicity received hate mail of employees, where they complain about the closed culture, which has a value of only “what they think Mike and Jim.” Steve Jobs – a perfectionist, but at least it allows good ideas to rise from the bottom.

5. The problem of “big fish in small pond.” Waterloo – a small town, there are only 200 000 inhabitants. When Balsillie and Lazaridis stroll through the city, they are local gods. Anyone who met him, or he worked at RIM, or his friend worked there, or his business depends on money brought by RIM in the local economy. This allows you to Balsillie and Lazaridis in the last four and a half years to console themselves with the fact that RIM – still a great company, and Apple and Google are nothing special. Who would vote differently in a small town? If RIM was located in an area with more competition – for example, in Silicon Valley, where they would be “small fish in a big pond” – Balsillie and Lazaridis, probably would not be so complacent.

6. The strategy of “Without China.” During trips to mainland China, I almost never see a BlackBerry – except that investors from Hong Kong. Compare this with Apple, which has sales in China, 10% of its revenues last year and this year we expect a lot more. His success owes partly Apple investment in China. RIM on the market did not appear.

Can RIM be saved? I think not. The proposals that I have heard from shareholders, including, in particular, the separation of the company, the appointment of a new independent chairman of the board of directors, non-bicapital management structure or even the displacement of both CEOs. It’s doubtful all medications for a patient with end-stage cancer.

Motorola in 2007, was in a similar situation. They had a terrible product line. Charles came and demanded Aikan separation into two companies and to attract new “professional” leadership in the field of mobile phones. They have conducted numerous layoffs and agreed to cooperate fully with the Android operating system from Google. Nevertheless, after four and a half years of their shares are traded much lower than they were at one time, and it is still unclear whether the new phones and tablets to raise a company to its previous level.

Forget about this, once great company. Days of Research in Motion as an independent producer are numbered.

8 Religious Leaders That Are Most Active On Social Networks Sites