Two Dots is a puzzle video game and is actually a sequel to the game Dots by the same company PlayDots. I found about this game when I came across an article by Buzzfeed, and decided to try it out.

The way you play this game is very straightforward and simple. All you have to do is connect as many dots of the same colour as you can in different combinations to core the most points. For example, you can make square combos that explode, or connect dots in a zig-zag fashion, that will earn you more and more points. Puzzles become more difficult and complex as you progress. 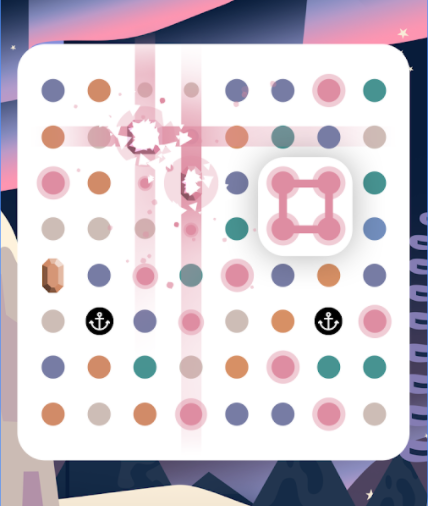 What’s not so simple, is putting your phone down and not logging in every 15 minutes.

I really don’t know how to explain this but although I’m not essentially crazy about this game, I still find myself jumping to it whenever I get the chance. Perhaps it’s the calm sensation you get when playing the game because of its simplistic and minimalist design, but whatever it is, there’s something about it that keeps you wanting more.

Very few games give me satisfaction. This one, my friends, is one of them. I am absolutely obsessed with this game. I’ve been playing it for years and it still has got its charm. Although the game had some issues with recent updates, bugs get fixed quickly and the developers take feedback very seriously.

Bejeweled Blitz is a simple match-3 game, where you have to match at least 3 jewels of the same shape and colour. Of course, if you manage to match more than three, it’s even better because you score higher points and gain bigger boosts and rare gems for massive scores. You will find a lot of variations of this game, but this is the one I’m talking about.

I guarantee you will get hooked on this game; as your mind starts scanning the screen for potential matches and your finger starts racing up and down swapping jewels the best way to pop the most jewels, you’ll know you’ve been sucked in!

Your life’s mission will become to beat your previous score and score high enough to someday see your name on the top of the leaderboard.

Sweet Alchemy has actually been released pretty recently. In fact, I’ve only downloaded like three days ago, and I’ve been enjoying playing it quite a bit. I have a rather particular taste in slot games and the theme for the slots I usually go for are fairly different, but I guess one of the things that attracted me to the game was, (funnily enough), the graphics.

The whole game is colourful and the reels are packed with yummy-looking candies. There’s also a cute witch that looks like an anime character on the right. I’m a very visual person and am usually attracted by things based on how they look like, and this game just looks nice and is visually satisfying to me. In fact, I guess, sometimes I do judge a book by its cover, but hey I can’t help it. If something looks nice, I’m more likely to give it a shot.

However, once I do check something out after the preliminary stage, I do get to criticize it if it doesn’t meet the standards. In this case, I am glad to say that I wasn’t disappointed. The game not only looks great, but it has a lot of cool features and bonuses that are not so impossible to get. What is also great about this slot is that it is that it is a cascading slot.

The symbols of Sweet Alchemy are also what makes it stand out. One of my favourites is the Sugar Rush Meter which fills up every time you win. Not only that but, depending on the number of symbols the meter is filled with during each round, you are rewarded with different Wilds, and if you manage to get the maximum number which is 38, you get to trigger the Mix the Elixir Free Round feature which can help you win big.

Although this game’s pretty new, I think it’s going to do pretty well.

Oh my goodness, this game is sooo bewitching! (See what I did there?) If you thought getting hooked on Candy Crush was manic, take a load of this! From the same makers of the game saga that took over the world, comes the newest (and best) game in the Bubble Witch series.

It’s not just the bursting of bubbles that makes this game so exciting, but the storyline itself is awesome. Basically, you set out on this adventure with Stella (yep, the witch has a name), and you need to help her defeat this adorable-looking kitty who’s actually a badass evil feline who goes by the name Wilbur and save the fairy queen in the process.

The game has an impressive 4.7 rating on Google Play and has some very positive reviews. If you love puzzle shooting games, this is a must!

How To Play Live Roulette : Know the Rules

How To Choose A Machine Learning Development Contractor?