It has happened to all of us once in a while. When it’s not there, we miss it and wish he had kept it for later use. Yes, I’m talking about online videos. We see a video online that we like, but there isn’t a way to keep it stored so that we can access it without using the internet; while we’re on the move, for example. Besides, internet connection speeds can be a real headache at times and it can be extremely irritating to the user to let a video buffer completely before it can be viewed without worrying about interruptions. Worry no more, because help is at hand thanks to a new website called http://www.videograbber.net.

This website, in essence, grabs video files from websites which stream video. It supports almost all popular websites and also a few relatively obscure sites. The technique of grabbing a video is rather simple as well. The user just has to go to the website and type in the address of the page which has the video. The website then does its magic and provides a download link which contains the video. It can be downloaded in a number of formats like Flash Video and MPEG-4.

The website supports grabbing videos from over a thousand websites like Youtube, Vimeo, Dailymotion, Metacafe, myspaceTV, among others. It is constantly looking to add more videos to this already extensive list. Users are encouraged to send them a mail if they would like them to add any other websites to their list. It can be mailed to their technical engineer. 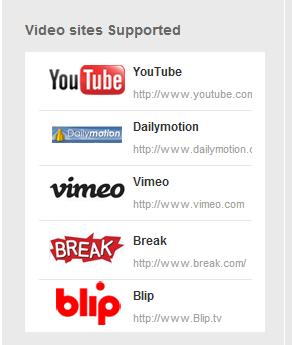 The site, as said before, supports almost all major video sharing websites. The largest video sharing website is obviously Youtube with millions of users and thousands of new videos being added every minute. The website doesn’t allow users to download most of its videos and is meant to be viewed on the website. But videograbber.net will grab any video for their users so that they can watch it offline even when they are offline.

Another major video sharing website that has gained popularity in recent years is a site called Vimeo. It is popular for sharing HD (high definition) videos and videograbber.net allows downloading of these high quality videos as well. One of the most popular category of videos in Vimeo is uploads by amateur photographers of night life in various cities, long exposure videos of stars, etc. These are exceptionally beautifully shot and it is only natural that viewers will want to see them more than once.

Similar arguments apply to rare videos of bands performing at concerts across the globe. Many fans aren’t lucky enough to see them live, so the video sharing websites come to their rescue. But it is uite possible that many people in less developed nations don’t have access to the internet, so videograbber.net makes these videos accessible to the fans in those places.

There are television shows that are not broadcast in certain countries, or are broadcast late. In those countries, there are fans of these shows as well. So they can download these videos from the video sharing websites and enjoy them. The same can be said of other videos such as technical talks as well as certain tutorials. The latter is an especially good case in point. Youtube, and various other video sharing sites, have a number of channels where the uploader provides tutorials on a number of subjects ranging from musical instruments to computer software.

A user can simply download the videos and then learn them according to his/her convenience. Also, some lessons may be harder to grasp than others. This will require streaming the video multiple times. Many users have internet connections that have a data cap, above which any data transmission is additionally chargeable. For these users, it makes more sense to download the video once and play it offline as many times as they want, and more crucially, whenever they want.

Some websites like CNN, Netflix, etc. stream their videos in a way that they can’t be captured or grabbed by normal means. To get around this problem, the people at videograbber.net came up with a novel solution. Their professional toolkit, appropriately called Video Grabber Pro, allows users to capture whatever is playing on their screens. This way, the users can download movies and television shows with ease. A similar technique was used earlier by avid gamers to prove to their compatriots that they could manage to surpass a particular level in a game, or something of the sort. The website also allows users the choice of downloading the videos in a number of formats like MPEG-4, Flash video, Windows Media Video (wmv) etc.

This is done so that the videos can be viewed on one of the many portable devices available on the market nowadays such as the iPod, Zune player, etc. User reviews say that the website is very good and the interface is extremely user-friendly too. The entire process of grabbing the video is done on the server and users don’t need to download anything other than the video itself. The best part about this website is that it is free to use. The Pro interface needs to be bought, but the regular video grabbing is free. Another advantage provided by this website is that doesn’t require any of the resources on the user’s computer and saves him or her a lot of effort in capturing the video and then converting it into a desired format.

The website uses software called Video Download Capture. The software can be used for a number of functions such as video downloading, conversion, editing, as well as screen capture. The software also contains video player software which can play nearly any video format. The software can be downloaded for a trial period of 7 days; so it can be used by someone who needs to urgently convert a video or do some quick editing. After the trial period is over, it needs to be purchased from the company’s website. The trial version can be downloaded from this address: http://www.video-download-capture.com/