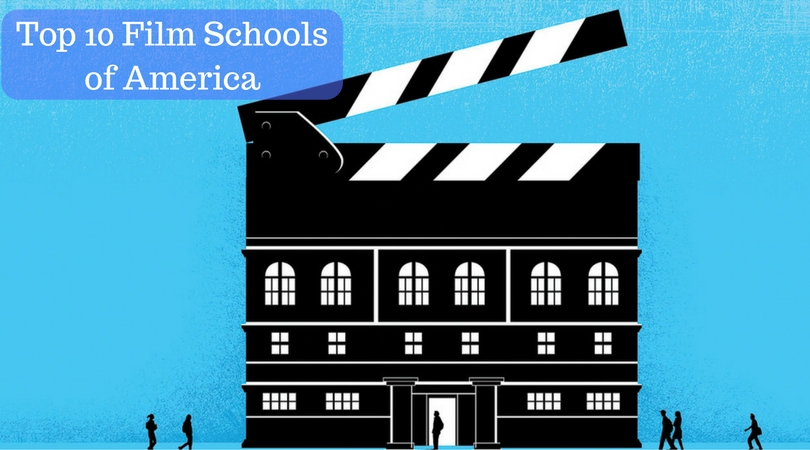 To become a filmmaker, it used to be quite easy. One only required a 16 mm camera along with film stock and a brilliant teacher. However, many new filmmakers have followed this, but most of the students consider attending film schools to learn how to become a filmmaker.

These film schools provide state-of-the-art AR labs along with various impressive technologies with getting a chance to learn from James Franco in one case. This can become quite confusing for the budding filmmakers to choose the best film school that fits their requirement.

So to help these students, we have come up with top 10 Film Schools in the United States with their features, course fees, and credit cost to make things easier.

When it comes to film school in Boston, this school has a great connection with the movie industry. Its internship program is the most aggressive one when it comes to placing its students with notable Hollywood producers, studios, and networks.

With satellite campus in Hollywood, Emerson upgraded itself to cool digs on Sunset Boulevard. Jay Leno and Norman Lear graduated from this school. Its other notable alumni are Sony’s Andrea Gianneti, DreamWorks’ Holly Bario, and others.

Wesleyan’s College of Film and the Moving Image is one of the liberal arts colleges along with being a film school which means that its students are educated with the practical side of filmmaking along with critical and historical analysis. Its beloved faculty icon is none other than Jeanine Basinger which is considered to be the inventor of the discipline of film studies.

Being one of the best film school, LMU’s School of Film and Technology is a smallish school. It is based in Westchester, California. It has one teacher per 12 students. Its curriculum is growing a lot. It has also launched a facility in its neighboring Silicon Beach with its new certificate program in digital storytelling and documentary. Its notable alumni include Hunger Games director Francis Lawrence, James Wong, the producer of American Horror Story.

Many known celebrities like Hugh Hefner have sent their children to this school. Chapman’s Dodge College of Film and Media Arts has a whopping $42 million with 76,000 sq.ft facility which was designed by Bastien and Associates, the firm that also built soundstages for well-known media houses like Paramount, Warner Bros. and more.

Its notable alumni are Kelly Galuska, Justin Simien, and others.

6. California Institute of the Arts

This school built by Walt Disney in Valencia, California is quite famous for producing top of the line animators. Its Pete Doctor became the latest alumni to get an Oscar for his film Inside Out. It has also provided great producers like Zachary Drucker and Transparent’s fame Rhys Ernst. Students can register for One Act to Cinematic Event where James Franco has taught in this school for five years.

Its notable alumni are Tim Burton, Kirby Dick, Brenda Chapman and others.

Columbia University’s MFA program will be celebrating its 50th anniversary in 2016. Without this, the famous crime doc series “Making a Murderer” wouldn’t be possible. It was started by two of its graduates – Laura Ricciardo and Moira Demos.

According to Demos, Columbia is quite focused on various aspects of the story, narrative, and character. Its notable alumni include James Ponsoldt, Nicole Holofcener, and others.

UCLA’s School of Theater, Film, and Television continues to be the perfect choice of a large number of aspiring filmmakers. This school accepts only 2 percent of undergraduate applicants. It provides a free-spirited approach to filmmaking which encourages its students and graduates to experiment a lot.

Its notable alumni are Justin Lin, George Takei, Francis Ford Coppola and others.

NYU’s Tisch School of the Arts remains to be the most prestigious film school situated at the east of the Hudson River. Famed filmmakers like Martin Scorsese, M. Night Shyamalan, are alumni of this college. Its students produce more than 5000 movies every year.

Its notable alumni are Joel Coen, Cary Fukunaga, Spike Lee and others.

This institute created history at Student Academy Awards where its students won Gold, Silver, and Bronze in the narrative category. It has remained to be a top choice of students. With its effort to maintain gender equality, it admitted more female students than male in the directors program, in 2015.Its editing track will get a new boost with the hiring of Matt Chesse, an Oscar nominee.

Its notable alumni are Darren Aronofsky, Terrence Malick, David Lynch and others.

Founded in 1929, USC’s School of Cinematic Arts remains to be the top choice of ours. Betting big on augmented and virtual reality, this school has always been ahead of its time. It received $10 million endowments from its alum like George Lucas providing support to students from underrepresented communities.

With this, we end our list of top ten film schools in America. Hope this list helps the prospective filmmakers to choose the right film school to pursue their dreams. We would like to know about your views on our list. Don’t forget to mention your opinions in the comment section below.

Top 10 online MBA programs in US