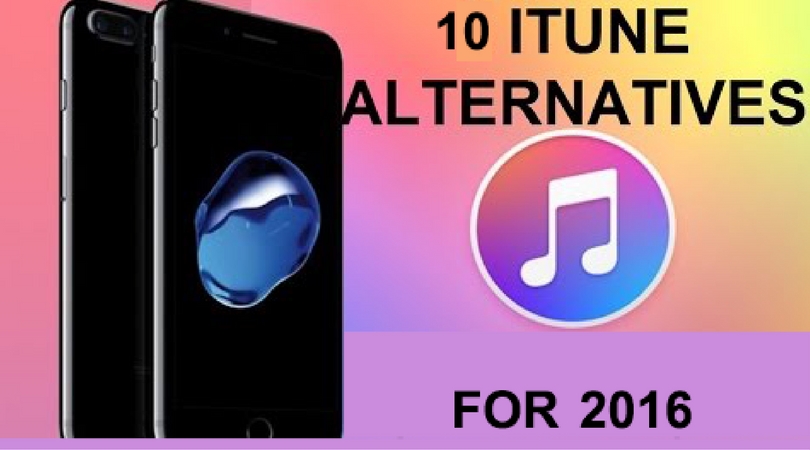 iTunes remains to be among the most used applications on a different platform and the reason for that is the iOS devices. iTunes is a beautiful software that people loves to use but the complete range of Apple’s iPhone, iPad and iPods lies on this software when it comes to media or music transfer along with device management and software updates with other different things. However, over the year the dependency of Apple on it has reduced, but it remains a valid fact that the drivers of iDevices can only get installed on your PC after installing iTunes. The major problem with iTunes doesn’t look impressive. Its interface is better than other apps which we will discuss. The focal problem of iTunes is that it is bloated and not reliable.

So, there are alternatives for iTunes which can act as a daily driver while the iTunes application remains installed at the side. Since iTunes is more than a mere media manager or player, we have considered various tools that take other aspects of iTunes. Like as iOS device management and sync with Android phones.

This lightweight media player comes with a great interface in which few elements become available with larger display sizes. It automatically finds and imports iTunes library and then offer playback notifications via an always-on-top widget. This tool also supports connectivity with Facebook, Twitter as well as Last.fm accounts. This software is also capable of iOS app which replaces your default music player on your smartphone or the tablet.

This lightweight software is designed for seamless iOS/iPadOS data backup and transfer. Different from other software, it also provides you more flexibility and safety with handy built-in the functions to encrypt, convert, and selectively restore content. It can also simplify the way you manage iOS devices with custom options and no data erasing, e.g. manually manage music, videos and photos, merge duplicated contacts, set custom ringtone and more.

This software is quite heavyweight and is a multi-utility package which aims to remove the requirement to visit iTunes, no matter whatever your requirement is. It is not just a media player or manager, it is an entire iDevice management suite that enables to reverse copying via which you can import music from your devices into your computer in place of the traditional and mundane way. TunesGo also provides direct syncing of iTunes media library with any Android smartphone.

For Windows, this application has a capable free version which also fulfills the purpose of many users. For Mac, the trial is available for free while the complete software is actually paid.

This is another OS-X alternative of iTunes which points on the media playback part while ignoring others. This tool comes with social integration and also provide you with the capability to connect with Last.fm account. It has metadata/ID3 tag editing along with auto-detection of AirPlay ports in case any of these is available. Its interface reminds of iTunes, so that will make your navigation through the software quite simple and known.

When it comes to Windows machine, MediaMonkey is a great choice. This software is a powerful media management suite which not only brings entire music and videos together but also allows you to find missing track information automatically and then fills these gaps with album art. It will also allow you to remove duplicates, create auto-build playlists on the basis of your listening habits along with recording music from any audio or video disks and also supports a wide range of formats and can also sync music to iPhone or iPods.

This is a free software however the gold version to which you can upgrade brings additional features. The major issue with this software is that it has steep and larger learning curve.

It is a diverse and a cross-platform media player along with manager which also has clients for not only Mac but also for Windows and Android and also keeps your media library totally in sync across various devices via a WiFi connection. It is one of the most reliable software in case you have any Mac or Android phone and wish to sync the music library with iTunes.

When it comes to being a music player, it does the job. It has a no-nonsense approach with a familiar interface. It is also free to use and comes with optional paid version which comes with advanced features.

This is a hardcore device manager for iPhones, iPads, and iPods which is fully equipped. It comes with different features which you expect from any device manage which also includes media transfer, taking backup of device content, syncing, music, videos, etc. This software also provides wide range of information belonging to any connected device. This software is free however, it is only available for Windows.

This is cross-platform, watered down version of SynciOS. It has various capabilities which you expect from any device manager. This tool doesn’t require any iTunes installation to transfer any music to/from an iPhone/iPod. It also supports drag-and-drop actions which is quite easy to do.

This software is for OS X only media players, especially for music lovers. This is a paid software along with an interface which reminds of high-end radios of the present. It provides accurate visualization of the wavelength of the music. It is only media player which uses iZotope technology for optimal sample rate conversions.

Vox is an attractive software present in the market and remains to be best media player when it comes to seamless integration with SoundCloud along with easy Last.fm scrobbling. It provides great results if the tracks are of high quality. The “Loop” technology allows to store music library in the cloud without any loss of quality.

When it comes to media management, this software is another biggie. It is the only software which supports different platforms and the only program that connects with the different social channels such as SoundCloud, Spotify, Last.fm and different network services. It also crawls through all the connected sources and then provides the best version of the song. It also provides Google, Facebook and Twitter connectivity which enables you to share your playlist with your followers and friends.