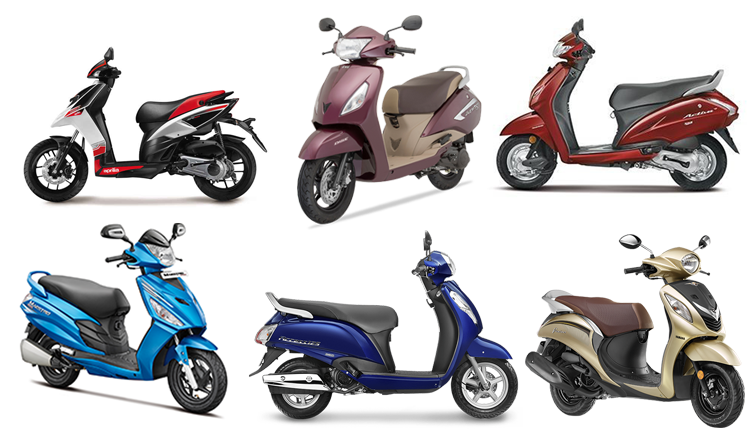 It all began with the successive launch of Honda Activa back in 2001, where the emergence of automatic scooters started in India. In the year 2017, the entire total sales of these scooters crossed over 5.6 million units, and the entire scooter sales have been rapidly growing till data. At present, the prospective customers of scooter are provided with multiple choices by all of the major two-wheeler manufacturer which offer different models to these customers. Clearly, these automatic scooters are going to stay and will remain to be constantly favoured by the customers living in towns and cities all over India. Here, we present you to top 10 scooters available in the market.

It is the first ever scooter with 125 cc engine from TVS which is launched in India and remains to be the top choice if you are going to buy a scooter. It has edgy and angular design which is quite refreshing than most of the other options in India. It is among the most feature-rich scooter in India which comes with smart connect system that is an interface which can easily pair the scooter with your smartphone through Bluetooth. Also, there are different other features which are offered with this scooter such as LED daytime running lamps, 22 litres of underseat storage space, front disc brakes, optional USB port and many more. It has 125 cc single-cylinder engine which delivers 9.3 bhp at 7,5000 rpm and also 10.5 Nm of peak torque at over 5,500 rpm. It is considered to be the benchmark of all the 125 cc scooters in India. Its ex-showroom price in Delhi is INR 58,687.

Among the most recent scooter to be launched in the Indian market is Suzuki Burgman Street. It is the first 125 cc maxi-scooter which is launched in India and it uses the same engine as well as chassis used in Suzuki Access which is among the best selling 125 cc scooter in India. It has a unique bulbous design that provides a solid street presence. It has 125 cc engine unit which gives 8.58 bhp at 7,000 as well as 0.2 Nm at 5,000. It also has a couple of cubbyholes present up front along with 12V socket, optional USB charger as well as an LED headlamp which makes it feature rich. It is among the best scooter with ex-showroom price in Delhi at INR 68,000.

It is the latest scooty model which is launched by Honda, a Japanese company, in India. It is a 125 cc automatic scooter launched in the last year. It comes with all-new design and it is termed as best-looking scooter from the house of Honda. Along with its great looks, it comes with a wide range of features which include fully digital instrument console, LED headlamp, optional USB charger, along with comb-braking system and lot more. It has 125 cc single-cylinder engine that generates 8.52 bhp at 6,500 rpm along with 10.54 Nm of torque at 5,000 rpm. Its ex-showroom price in Delhi is IR 59,043.

It is the second largest selling scooter after Honda Activa and it is quite easy to understand why. It is fully loaded with convenient features like external fuel-filler cap, optional disc brake, telescopic suspension, USB charging port, a pass with along with claimed mileage of 62 kmpl. It also has 12-inch wheels at both front and rear which provide high-quality ride. It has 109 cc engine which delivers 8 bhp and 8 Nm which is comparable to its competitors. Its price range starts at INR 49,666 (ex-showroom, Delhi).

It is not just the largest selling scooter in India but also the largest selling two-wheeler. Its 4th generation model complies with Bharat Stage IV emission norms and also comes with auto-headlamp feature as well. At present, there are three models from Activa family on sale in India which are Activa I, Activa 4G and Active 125. The Activa I and Activa 4G comes with same 109 cc engine which delivers 8 bhp along with 9 Nm whereas the Activa 125 comes with 124.9 cc engine which delivers 8.52 bhp and 10.54 Nm. However, both Activa I and Activa 4G don’t get the extensive features but when it comes to Activa 125, it has telescopic suspension, optional disc brake and digital-analogue instrumentation as well. The price range of Activa starts at INR 47,913 for Activa I, INR 50,730 for Activa 4G while Activa 125 is priced at INR 56,954. All of these prices are ex-showroom, Delhi.

It is among the largest selling scooters from Hero MotoCorp. It is duly powered by a powerful 110.9 cc engine that delivers 8 bhp and 8.7 Nm of torque. Similar to Jupiter, it also comes with wide range of features like telescopic suspension up front, LED tail lamp and a BS IV compliant engine which has AHO. It also has the 12-inch wheel up front while the rear wheel is 10-inch. It comes in a single variant duly priced at INR 50,480 ex-showroom, Delhi.

It is best-selling scooter of Yamaha last year with over 2.13 lakh units sold. It comes with 113 cc single that delivers 7 bhp and 8.1 Nm. The main significant feature of this scooter is that it is among the most fuel efficient 110 cc scooter which has a claimed mileage of 66 kmpl and it has significantly different looks which make this scooter stand out from its competition. It has telescopic suspension at front but it doesn’t have any disc brake variant. It is priced at INR 54,330 ex-showroom, Delhi.

While the Jupiter is aimed towards a wide range of audiences, this scooter is targeted towards female buyers with its light-weight body and trendy styling. It has the same engine that Jupiter has and it comes with same mileage of 62 kmpl. It doesn’t have wide range of features that Jupiter has, but it is well-equipped and is very agile as well as well-balanced scooter when it comes down to handling. It comes in two variants where the standard variant is priced at NR 46,538 while the matte series is priced at INR 48,038. Both of these prices are ex-showroom, Delhi.

It is the most radical-looking scooter in the market and also the most powerful in this list. It is the first Aprilia scooter to be launched in India. It comes with a 154.8 cc engine which delivers 10.25 bhp and 11.4 Nm. It takes the prime spot when it comes down to performance and looks. It has thick 14-inch front and rear wheels with a 220 mm disc brake up front. It also has a USB port in its under seat storage area. It has a top speed of over 100 kmph. With all these features, it is the most expensive scooter in our list with an ex-showroom, Delhi price at whopping INR 70,374.

What Does a Cosmetic Laser Technician Do?